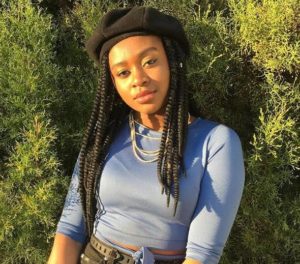 ‘Beast of No Nation’ is the first song Fela wrote in 1986, after he was liberated from prison—serving two years from a five year prison sentence for trumped-up foreign currency violation charges.

In May, Emediong’s painting of music legend, ‘Lagbaja’ became the first African work to be displayed at the Cyprus Modern Art Museum.

The Akwa Ibom born artist is the youngest and only African artist to have her work exhibited at the museum, which is the largest in the Mediterranean region.

At her recent exhibition, Emediong also unveiled another Fela-inspired work, ‘Shuffering and Smiling’ to celebrate the strength of Nigerians.

In an interview with the News Agency of Nigeria (NAN) on Friday, she said the painting is aimed at drawing attention to leadership lapses that need to be fixed in the country, while retaining Fela’s earlier message.

She said, “I decided to depict the essence of the song. It spoke about the leaders and how they need to do better at leadership.

“I did the painting in about a week this summer, 2019. I want the painting to spark conversations and I hope it inspires people.”

Emediong is known for using musical influences in her art and revealed that she loves every music genre with a message.

On Fela’s influence on new wave musicians, she noted that they are Fela-inspired in a way, from their sounds to lyrics.

She said, “These artists are Fela inspired in a way, especially Burna boy. His piece on the Beyonce album has some Fela-infused vibes.

‘Gimme a name for my Album,’ Davido appeals to fans