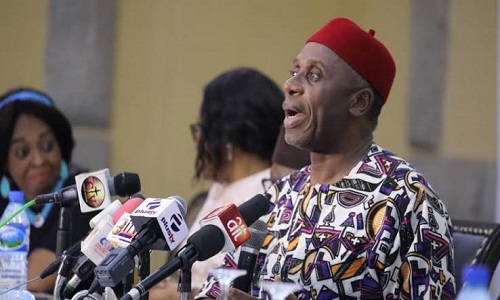 As plans for the disbursement of the Cabotage Vessel Financing Fund (CVFF) gathers momentum, the Minister of Transportation, Rotimi Amaechi, has said lending institutions will be empowered to hold any beneficiary shipowner accountable for every kobo collected as facility. The CVFF stands at about $200million.

He spoke at a meeting in Lagos on Thursday organised by by the Federal Ministry of Transportation, in collaboration with the Nigerian Maritime Administration and Safety Agency (NIMASA).

“We have agreed to form a committee that will draw up guidelines for the disbursement of the CVFF. It is the guideline that will be drawn up that will be taken to the National Assembly for ratification. The committee comprising some stakeholders will be headed by the Director-General of NIMASA and they will decide if the interest rate that will be attached to the CVFF will be single digit or not,” Amaechi said.

“The commercial banks will first and foremost give criteria to access the funds, so any shipowner that does not meet up with the banks guidelines will not be a beneficiary. So, in this case, the risk will be borne by the lending institutions.

“If we just allow people to take that money without a proper framework to service their loans, then we won’t achieve our aim of developing the maritime economy. People must borrow and return money borrowed so that others can benefit from the CVFF,” Amaechi insisted.

NIMASA Director-General, Dakuku Peterside revealed that the funds stands at about $200million.

He said the committee would come up with draft guidelines, which the Minister would study and pass on to the National Assembly for ratification. He said this would be the preceding step before commercial banks would be authorised to disburse the funds.

“The CVFF is about $200million and the guidelines will determine the manner of disbursement,” Peterside said.

The Federal Ministry of Transportation had last year revealed that President Muhammadu Buhari had okayed the disbursement of the CVFF in the first quarter of this year.