The victory which became a first time the 2018 competition runners-up were lifting the title after a 66-year wait for a second Cup success, took place, just as Nasarawa Amazons won their first Women Aiteo Cup title, also following a 5-4 penalty shootout win, against defending champions, Rivers Angels at the Ahmadu Bello Stadium, Kaduna on Sunday.

Kano Pillars had won the trophy once, even though it was in the old FA Cup competition and with their defunct side, when they edged out Lagos Dynamos 2-1 in 1953.

With only two runners-up position to their name (1991 and 2018), in spite of their tremendous success in the local league, they were duly hungry in their quest for Cup success.

The victory also came as a consolation to those club faithful who were yet to recover from last year’s shock defeat to Rangers in the final.

In that match, Pillars led Rangers International of Enugu 3-0 after about 60 minutes at the Stephen Keshi Stadium in Asaba.

But the 1977 African Cup Winners Cup champions stormed back to equalise and then win on penalty kicks.

Niger Tornadoes who also lost in the competition’s final on penalty kicks to Akwa United in 2017 also came into the game looking to appease their fans.

They lost their Nigeria Professional Football League (NPFL) status at the end of the recently-concluded season.

In Sunday’s game, the two teams fought hard but were unable to register a goal following 90 minutes of a keenly-contested encounter.

The lottery of a penalty kicks shootout was therefore needed to decide the winners, with Pillars triumphing after converting four of their six kicks and Tornadoes only scoring three. 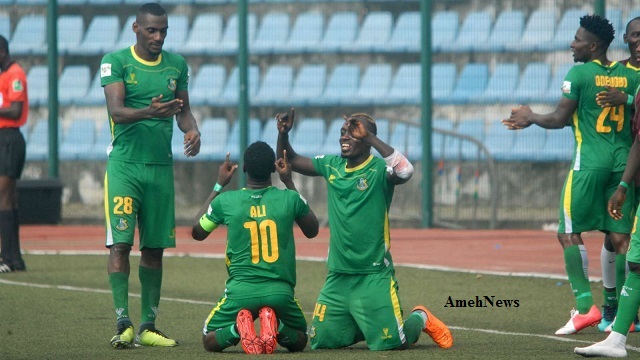 Kano Pillars smiled home with N25 million as prize money for winning the title, while Niger Tornadoes were N10 million richer after finishing as runners-up.

The Rivers Angels dominated possession in the women Aiteo Cup 2019 final, but were unable to find a way past a resolute Nasarawa Amazons defence.

Both teams battled to a goalless draw in regulation time with penalties needed to determine the winners of the contest.

Super Falcons goalkeeper, Tochukwu Oluehi, who replaced her international teammate, Chiamaka Nnadozie, on the dot of 90 minutes failed to make a save in the shootout.

The winners of the 2019 women’s Aiteo Cup final pocketed N10 million as prize money, with the runners–up settling for N5 million.