Air Warriors Basketball Club of First Bank of Nigeria on Tuesday defeated the Black Gold Queens of Zenith Bank  73-23 in their second match in the Savannah Conference phase of the 2019 Zenith Bank Women’s Basketball League. 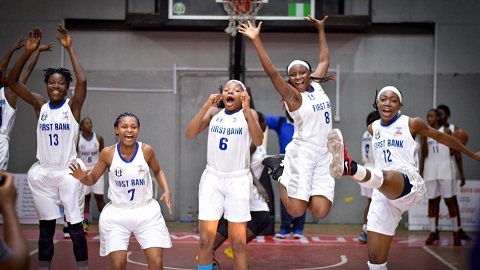 The News Agency of Nigeria (NAN) reports that the match was played at the indoor sports hall of the Moshood Abiola National Stadium in Abuja.

Speaking after the match, Samson Sotuminu, the coach of Air Warriors, said he was happy his team won the game.

“It is against a team we have played before and we know how to play against them.

“So, we just need to now go back to our drawing board and prepare ourselves more for the next match, which is against Kaduna Angels.

“But I will still give my players kudos for a work well done to ensure victory, and we will work hard to win our remaining games,” he said.

On his part, the Head Coach of Black Gold Queens, Lawal Daddy, said they lost the game to Air Warriors because they wanted every player to have a feel of the match.

“It was a strategy, so that the team would give everyone opportunity to play.

“All we want to do is to qualify first for the national finals then we can decide to display our skills.

“I already told the players we are going to come out strong for the next game and everybody in the team is ready because they are not happy that we lost the game today.

“But the plan was to just create an avenue for the regular five to rest, so that they can play the next game on Thursday.

“That game against the Adamawa Flames is going to be awesome and I see my team playing better,’’ he said.

NAN reports that the league’s conference phase which began on Oct.1 is expected to end on Oct. 8.