……. commending the Federal Government for recent efforts at improving the situation at the Lagos ports,

The Manufacturers Association of Nigeria (MAN) Q2 of 2019 Manufacturers CEOs Confidence Index (MCCI) survey conducted with primarily to feel the pulse of the manufacturing sector shows that port related challenges at the Lagos ports still persist.  Majority of the CEOs (94%) interviewed agreed that congestion at the ports significantly affects productivity negatively. 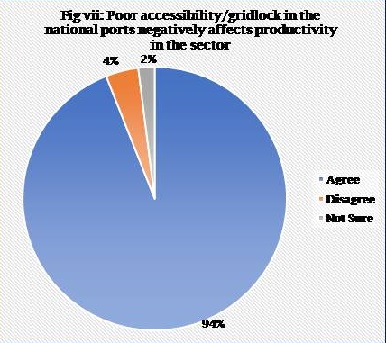 Chief Executive Officers (CEOs) of MAN member-companies across the six geo-political zones of the country and the ten Sectoral Groups of the Association responded to special purpose questionnaires designed for data gathering, analysis and utilized the outcome to strengthen the advocacy positions of the Association.

According to the report, the situation is unpalatable issues that manifest daily in form of delay in clearance of manufacturing inputs and machinery as well as high demurrage which increases cost of production in the sector and often times slows down manufacturing operations.

The report pointed out that the contributory factors include inadequate space inside the ports, weak trade facilitation infrastructure, poor road network and the associated traffic gridlock that all combined to limit operators’ access to the ports.

MAN however, commending the Federal Government for recent efforts at improving the situation at the Lagos ports, the persistent gridlock indicates the need for holistic measures that would engender lasting solutions and improve seamless access and operations inside the ports.

The report disclosed that over 400 CEOs of MAN member-companies across the country (as against 200 respondents engaged in the first quarter 2019) and the data collected analysis focused principally on the positions of CEOs on macroeconomic and business operating environments as well as perception on the earlier mentioned diffusion factors.