Buoyed up by the culture of Transparency, Accountability and Performance Excellence (TAPE) of the current NNPC management, no fewer than (96) prominent and reputable companies from various jurisdictions have indicated interest in undertaking the rehabilitation of the Nigerian National Petroleum Corporation’s (NNPC) downstream infrastructure ranging from critical pipelines to depots and terminals through the Build, Operate and Transfer (BOT) financing model. 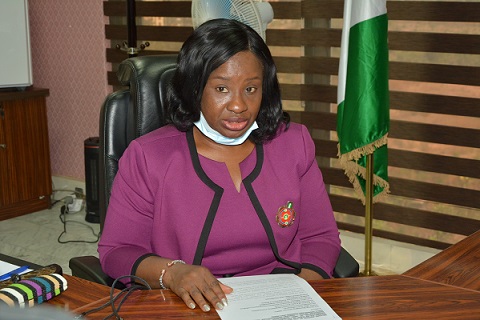 Managing Director of the Nigerian Pipelines and Storage Company (NPSC), Mrs. Ada Oyetunde, giving a background to the downstream infrastructure rehabilitation contract at the virtual bid opening event which held recently at the NNPC Towers, Abuja.

This was disclosed at a virtual public bid opening exercise which held at the NNPC Towers, Abuja for the pre-qualification of companies for the contract.

A press release by the Group General Manager, Group Public Affairs Division of the NNPC, Dr. Kennie Obateru, stated that the public opening of the bids for the contract was in keeping with the NNPC Management’s commitment to transparency and accountability in all its processes and transactions.

Speaking at the event, the Managing Director of the Nigerian Pipelines and Storage Company (NPSC), Mrs. Ada Oyetunde, disclosed that the exercise was in conformity with the mandate of the Federal Government to prioritise the rehabilitation of critical downstream infrastructure across the country.

She listed the facilities that would be rehabilitated by successful bidders to include critical pipelines for crude oil supply to the refineries and evacuation of refined products, depots, and terminals, stressing that the objective is to get them ready to support the refineries when they become operational after their rehabilitation.

The NPSC boss said that the BOT arrangement would provide a reliable pipeline network and automated storage facilities for effective crude feed, product storage and evacuation from the nation’s refineries post-revamp through an open access model and charge market reflective prices and tariffs to recover the investment.

On hand to observe proceedings at the public bid opening exercise were representatives of the ICRC, BPP, the Nigeria Extractive Industries Transparency Initiative (NEITI) and Civil Liberties Organisations (CLOs).

Highpoint of the event was the display of the 96 companies that submitted bids for the rehabilitation projects.

MultiChoice Brings Back Special Step Up Offer on DStv, Discount on GOtv Max this January