It was a chaos along the Liverpool road in Apapa area, yesterday, Lagos when an official of the Lagos State Traffic Management Authority (LASTMA) allegedly killed a petroleum tanker driver who reportedly parked illegally along the expressway. 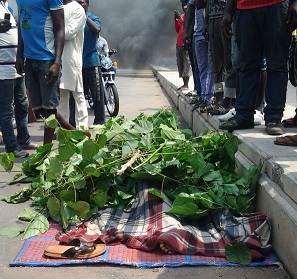 Eye witnesses at the scene of the incident when contacted said the LASTMA officials were on an evacuation operation along the popular Creek Road in Apapa when one of the officers jumped into a petroleum tanker and tried to move it away forcefully as they used to on other vehicles.

In the process, he (LASTMA officer) ran into one of the tanker drivers who died immediately.

In a reprisal attack, an eye witness said a group of tanker drivers who were on ground pounced on the LASTMA official and beat him very well before the timely intervention of police officers at the scene. Efforts to get the truck number and names of the victim proved abortive as police officers who swiftly taken over the scene of the incident and shot sporadically into the air to scare away tanker drivers and thugs who were trying to hijack the situation. When he was contacted Chairman, South-West Zone of the National Union of Petroleum and Natural Gas Workers (NUPENG);  Tokunbo Korodo expressed anger at the actions of the LASMA officials.

He lamented that the Lagos State Government had not served the union any notice of an imminent evacuation operation which he said was unusual, considering the cordial relationship between the union, the state government and the LASTMA.

He described the incident as an affront, and a deliberate attempt to provoke the union and its members.

Korodo confirmed the accident and said: “The situation was so terrible and we are surprised that in the course of enforcing removal of trucks on queue at Apapa, one of the

LASTMA personnel forcefully gained entrance into the truck. In the course of trying to drive the truck out to their location, accidentally, since he was not a professional, he lost control and killed one of our members”

“It was the annoyance of that incident that drew the attention of other co-tanker drivers who pounced on the LASTMA officer. We don’t know the condition he is in, maybe he is terribly ill or if he is dead or not, I am not a doctor”

LASTMA personnel, we have no course to confront each other, any area they found our members not doing the right thing they do call our attention to it and we quickly call them to order”.

The incident eventually led to heavy traffic gridlock around Apapa stretching from Creek Road as a result of the incident. Commercial and private motorists were held up for several hours as the police finally took the corpse of the tanker driver to the Area ‘B’ police head office.

When he was contacted earlier, Public Relations Officer of the PTD Lagos Zonal Council, Tayo Boyeji told our correspondent that the executives of the union are yet to take a decisive action on the crisis.

He promised to call back, but he never did.

Chairman of Association of Maritime Truck Owners (AMARTO); Chief Remi Ogungbemi confirmed to our correspondent that the traffic gridlock had affected container-laden trucks that were accessing the Tin Can Ports.

He however assured that normalcy has been restored on the axis.

“The police are working to make sure that the situation does not escalate, I am saying it authoritatively that the police are on top of the matter and it is being handled maturely.”

In similar is the incident of an offshore supply vessel; Chilosco was attacked by pirates about 30 nautical miles south of Brass, Nigeria in the increasingly volatile Gulf of Guinea.

The vessel was en route from Onne to Port Harcourt, but was approached by speedboat with armed men, who tried to board her.

There is no much information for the piracy attack, but according to preliminary information it was unsuccessful. The crew and security guards repulsed the attack and prevented boarding of the armed men. The alarm was raised and accident was reported to the local authorities. The navy escorted the offshore supply vessel to Port Harcourt, where will be held an investigation for the piracy attack.

There is not much information for the piracy attack. Neither local authorities, nor ship operator commented the accident, stating that it can affect the investigation. According to witness evidences, the pirates were heavy armored and well trained, probably ex Nigerian Delta militants.

The offshore supply vessel Chilosco has overall length of 53.20 m, moulded beam of 9.00 m and maximum draft of 3.50 m. The deadweight of the ship is 350 DWT and the gross tonnage is 454 GRT. The vessel is under ownership of LATC Marine from Nigeria. It is used for crew changes at deep offshore fields and urgent cargo shipments. The offshore supply vessel Chilosco was built in 2014 by Damen Shipyard in Gorinchem,