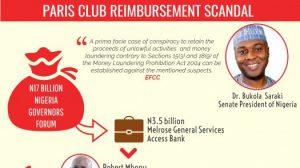 GCA Energy, one of the firms the EFCC accused of laundering money for Senate President Bukola Saraki blamed the anti-graft agency withheld crucial details about the deal, leaving Nigerians with the impression that it participated in the controversial N3.5 billion Paris Club refund scandal.

An EFCC report sent to President Buhari about Saraki’s alleged involvement in the shady deal had emerged in the media Sunday.

“That on 21st December 2016, GCA Energy Limited paid the sum of $25,000 to Asterio Energy Services Limited which subsequently transferred the sum of $23,200 to Cactus Communication Limited account with Access Bank.

But GCA Energy has denied any wrongdoing as its faulted the findings, telling PREMIUM TIMES in an email that the anti-graft agency failed to prove it did anything untoward.

“The EFCC failed to establish the correlation between the above referenced financial transactions which we do not deny but are concerned that it has been misconceived and tainted with insinuations that our company was involved in the commission of a criminal act or financial crime,” RCA Energy’s spokesperson, Obafemi Ajayi, said.

Ajayi explained the role of RCA Energy in the controversial deal as follows:

“On the 21st day of December 2016, Asterio Energy Services Limited contacted us seeking for assistance to help it raise the sum of $25,000 in exchange for its naira equivalent, which summed up to ₦12,000,000 as at the time.

“As players in the energy industry with a history of mutually beneficial business transactions, we obliged Asterio Energy Services with the solicited assistance believing that the dollar sum it sought was to meet business obligations given the paucity of FOREX at the time.

“Nothing besides this explains our involvement with Asterio Energy Service, as we have never been involved in money laundering nor been complicit in the reported ‘N3.5 billion Paris Club loan refund’,” Mr. Ajayi said.

Wilson Uwujaren, a spokesperson for the EFCC, could not be reached for clarification about the role played by RCA EnergyFriday afternoon.