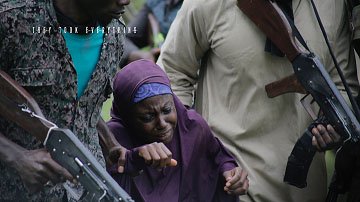 Centered around terrorism in Northern-Eastern Nigeria and inspired by true events, Voiceless features several Nollywood practitioners that told the story of Salma and Goni, two victims captured by a dreaded terrorist gang. While one is forced to work for insurgents as a skilled mechanic, the other, kidnapped alongside her fellow school girls to serve the group’s lusts and drive home their agenda against western education for girls. Amid betrayals and suspicions that make up the abductors’ camp, they find love, strength, and the will to survive and escape. Back in the real world, they face another battle for the acceptance of their love by Salma’s parents who have rejected the condition in which she returned home.

Speaking on the film after a recent screening at the Imax cinema, the Associate Producer of the movie, Eric Ossai said the movie was filmed in less than three months and took two years to meet its perfection.

Giving an insight about the movie and why it was shot in Hausa and subtitled in English, he said “We filmed only in Jos, this is a strictly local language movie, we decided to do a Hausa story, how can you do a Hausa story from the north and speak English? It’s a story that talks to your heart, it speaks to your soul even if you don’t speak Hausa and you decide not to read the subtitle, the emotions will tell you the story and Yes we sourced our actors from the North, everybody was northern actors.”

Voiceless was produced by Rogers Ofime, Directed by Robert O Peters, and written by Jennifer Agunloye.