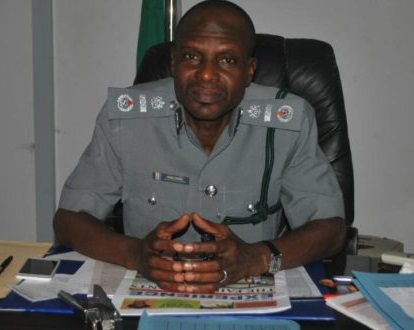 The Tincan Island Port Apapa received another boost in terms of infrastructural projects following the commissioning of a ‘ONE TREATMENT AREA’, to enhance the Operations of the Query & Amendment Department.  In the same vein, an Ultra Modern Canteen and a Mini Sports Pitch was also commissioned in an event which attracted Maritime Stakeholders.

According to the press statement by Uche Ejesieme, Public Relations Officer of the command, said the Customs Area Controller, Comptroller Musa Baba Abdullahi, while conducting the Zonal Coordinator round the projects, noted that the projects became imperative following the need to re-position the Command to an enviable height in order to add further impetus to its status as the most User Friendly Port in the sub-region. While declaring open the ‘ONE STOP SHOP’ the Zonal Coordinator Assistant Comptroller General Dahiru Aminu, commended the Customs Area Controller for his thoughtfulness and stated that the facility would address the incessant complaints of multiplicity of alerts, which hitherto was a recurring decimal.

“As the name connotes, stakeholders are enjoined to take advantage of this, especially for the facilitation of Legitimate Trade”.  The centre will house Query and Amendment (Q & A), Valuation and CIU for the synchronization and harmonization of trade disputes.

Similarly, the Zonal Coordinator, while commissioning the Ultra Modern Canteen and a Mini Sports Pitch, congratulated the Customs Area Controller for embarking on projects with considerable significance to the well being of the officers/men.  He particularly eulogized the Management and Staff of Seven Up Bottling Company Limited for donating a synthetic Mini Pitch as part of their Corporate Social Responsibility (CSR) and noted that it will serve the sporting needs of both officers and their esteemed stakeholder.

Declaring the session open, the Customs Area Controller emphasized the importance of EUC as a regulatory document and  urged Importers/ and or their Agents to ensure strict compliance with the processes and procedures in the interest of National Security.  The two day lecture was anchored by Deputy Comptroller BOMOI SULEIMAN, the O/C Customs Intelligent Unit Tincan Island Port.

Generally speaking, the CAC harped on the need for Stakeholders to build effective partnership by supporting and enforcing the Fiscal Policies of the Federal Government in terms of Trade, while reiterating his commitment to reward compliant declarants and to sanction complacence.