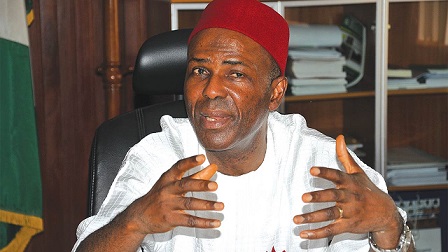 The Minister of Science and Technology, Dr Ogbonnaya Onu, has asked the board of the Federal Institute of Industrial Research, Oshodi, stop all process of appointing a substantive DG.

It was learnt that the directive was as a result of his quest to install Chima Igwe, a demoted official of FIIRO, as the agency’s director general.

The minister was said to have to stop the appointment of a substantive DG until Igwe was cleared.

The PUNCH had reported happenings at FIIRO since 2019 when Igwe was appointed the acting director general under controversial circumstances.

The Independent Corrupt Practices and other related offences Commission had been petitioned to investigate Igwe’s doctorate, which he had used to obtained several promotions until 2019 when the attestation letter he was parading as proof of the PhD became a subject of investigation.

The ICPC later revealed that the degree was non-existence, which subsequently led to Igwe’s removal from the DG’s position and demotion by the board.

The minister, Onu, however, instructed the board to reinstate Igwe as the acting DG, a request that was rejected by the board Chairman, Alhaji Ibrahim Gwarzo.

Gwarzo, who was presented with the Gani Fawehinmi Integrity Award in 2020 over his role in the matter, later revealed that the minister pushed for the dissolution of the board 10 times because of its refusal to reinstate Igwe.

Our correspondent learnt that since the incident, Onu refused to recognise the present acting Director General, Yemisi Asagbra, until he was ordered to do so by the Presidency.

Several attempts by the board to begin the process of installing a substantive director-general were allegedly rebuffed by the minister.

The latest process was said to have been stalled by Onu in a letter dated May 6, 2021.

The letter, which was signed by the Permanent Secretary, Ministry of Science and Techology, Edet Sunday Akpan, on behalf of Onu, was titled, ‘Re: Notification and Information.’

It said, “I am directed by the honourable minister to acknowledge receipt of your letter on the above subject ref. no. FGB/6.01/43 dated April 28, 2021 and inform you that the Presidency has directed that a detailed investigation be carried out by the head of civil service of the federation on the certification of Dr Chima Cartney Igwe as Director-General (FIIRO) with necessary disciplinary action, if required.

“In view of the above, you are further requested to suspend all actions and processes on the appointment of a substantive director-general/CEO for FIIRO; pending the outcome of the investigation and subsequent directives of Mr President on the matter.”

A source at FIIRO told The PUNCH that the investigation Onu referred to had been concluded and did not favour the minister.

The source explained that after the demotion of Igwe was officially communicated to him in July 2020, he refused to resume at the Lagos office of the agency.

The source said after about six months and with threats that his salary would be suspended, he resumed, but did not report to his new boss.

The official said Onu was bent on making him the DG, adding that the minister was waiting for the dissolution of the board.

The PUNCH learnt that the minister prior to this time had written a petition to the presidency, seeking the prosecution of the board for corruption.

A highly credible source told our correspondent that the Ministry of Finance was asked to investigate the allegation.

She said, “The Accountant General of the Federation received directives; a panel was set up, which came to Lagos. The panel wrote a report and the board and management were cleared of any financial wrongdoing.

“Onu wrote to the Minister of Justice again, who directed an investigation and it was discovered that there was no wrongdoing. So, the last time, the Office of the Head of Service was asked to investigate the issues surrounding the certificate scandal of Igwe. Everybody was invited, including directors. The report, which we learnt cleared the board, has been handed over to the Presidency.

“The board decided to go ahead with the process of appointing a new director general since it believed that the process had nothing to do with Igwe. The President had already ordered that (Dr Yemisi) Asagbra be the acting DG. The board wrote to the minister for ‘information and notification’ on this development. But within two days, he sent back a response and said the board should still wait for Igwe to be cleared.”

The PUNCH gathered that the board had resolved to continue with the process of appointing a substantive DG.

Efforts by our correspondent to speak to the Office of the Head of Service were abortive.

Onu and Igwe did not take their phones, which rang out several times. They did not also respond to text messages seeking their reactions to the allegations.

Meanwhile, an anti-corruption group, Human and Environmental Development Agenda, has called on the ICPC to prosecute Igwe.

In a petition dated June 7, 2021 and addressed to the ICPC, the group’s Chairman, Mr Olanrewaju Suraju, demanded that Igwe refund all earnings linked to his phantom certificate.

HEDA said if the ICPC failed to prosecute the embattled official, it would head to court “to ensure that justice is served.”

We Have Tribal War on Our Hands, Says Gumi