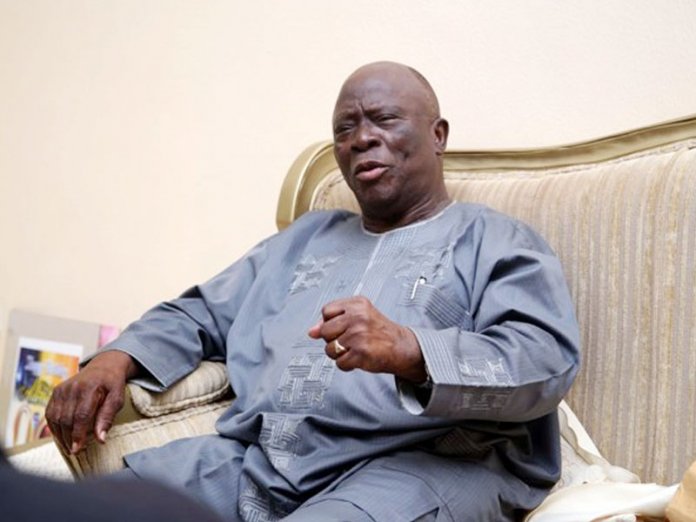 An elder statesman and chieftain of the Pan Yoruba socio-cultural organisation, Afenifere, Chief Ayo Adebanjo, has declared that after 60 years of independence, Nigeria has lost her past glory, insisting that only restructuring will restore the country’s path to greatness.

Speaking yesterday on the ‘Morning Show,’ a programme of ARISE NEWS Channel, the broadcast arm of THISDAY, Adebanjo also argued that Nigerians should mourn, rather than celebrate 60 years of independence that has nothing good to show for it.

“Attaining 60 years of independence is a milestone that ought to be celebrated, but we as a nation have no good reason to celebrate because it has been 60 years of pain, suffering and of late, Fulani colonialism, where Nigerians are massacred and brutalised by Fulani herdsmen, Boko Haram sect and other terrorists groups in the country,” he said.

The foremost nationalist blamed President Muhammadu Buhari for the current challenges of Nigeria, accusing him of turning blind eyes to the many killings of Nigerians by the Fulani herdsmen.

He said: “Our founding fathers like Dr. Nnamdi Azikiwe, Chief Obafemi Awolowo, Alhaji Shehu Shagari, Sir Ahmadu Bello, among others, fought for unity and true federalism of our nation Nigeria. They built institutions and left legacies, but all of that have crumbled and we are more divided under the present leadership of President Muhammadu Buhari. We should be mourning for this great nation Nigeria, having lost our past glory.

“We should mourn because Nigerians are massacred and those involved in the killings are not prosecuted and our government is settling terrorists with money instead of arresting and persecuting them for various offences committed.

“We should mourn because our health system has collapsed, our national airline has collapsed and our roads are in a deplorable state. We should mourn because there is so much corruption in Buhari’s government and his corrupt ministers are not tried and persecuted. We need God Almighty to change the mind of President Buhari to restructure Nigeria and reposition it on the path of success again.”

The Afenifere leader said Nigerians had become frustrated and divided because of poor governance, insisting that Buhari’s government has further divided the country by skewing appointments to favour the North and North –east.

According to him, only restructuring will bring back Nigeria on its right path.

He, however, said the first military coup in the 1960s did not help matters as its effects have continued to hunt the unity of Nigeria.

Adebanjo declared that instead of correcting the ills of the coup, successive governments kept blaming the woes of the country on the past leaders.

He acknowledged that the country was in a bad shape when President Buhari came into power, but added that instead of fixing the challenges of the country, Buhari kept heaping the blames on his predecessor.

According to him, Buhari has nothing to show, saying that the president has succeeded in dividing Nigerians more than he met them.

He further said Nigerian citizens would have been able to turn the bad situation for the better, but that the Buhari’s government does not give room for freedom of speech.

Adebanjo said the federal government came up with ‘Hate Speech’ law, which prohibits anyone from criticising his government.

“The majority of Nigerians are suffering and cannot put food on their table, cannot send their children to good schools, and cannot pay their bills, yet we are a nation of 60 years of Independence. It is a shame and it is worth mourning for,” Adebanjo said.

According to him, Buhari came with lots of promises during his political campaign but has failed in all his promises.

He also accused the president of deliberately refusing to restructure the country because of his hidden agenda to islamise the country.

Adebanjo urged all Nigerians to resist the Islamisation agenda.