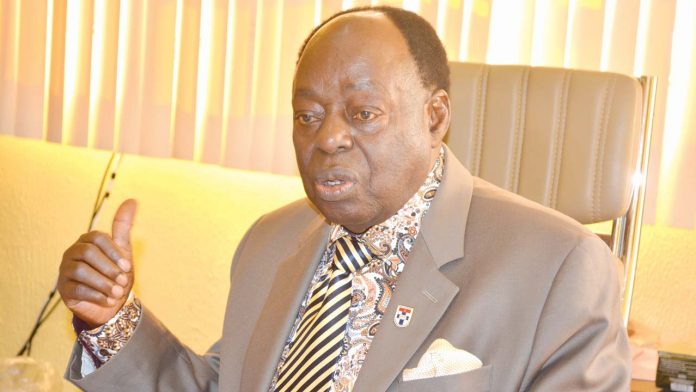 The founder of Afe Babalola University, Ado Ekiti(ABUAD), Chief Afe Babalola (SAN), has supported the objection by the Academic Staff Union of Universities (ASUU) that public universities are not safe for reopening now due to the COVID-19 pandemic.

Babalola said the refusal of the academic body to support the government’s proposal to reopen the universities was predicated on lack of safety facilities, which he said are valid and tenable reason, adding that this propelled him to back the opposition to school reopening.

On the danger posed by the dense population of the country estimated at about 200 million despite being a developing country, the legal icon called for the enactment of a law that would compel all couples to have a maximum of two children.

Babalola said: “From available facts on ground, COVID-19 has undeniably vindicated ASUU’s position, protests and grievances over the years about lack of necessary facilities, equipment as well as the decayed infrastructure in the universities.

“This is in sharp contrast to what is obtained in private universities most of which are reputed for their moral and physical discipline, quality and functional education, hygienic and safe environment, predictable academic calendar, absence of unionism, committed teachers, modern teaching equipment and laboratories as well as adequate preparation to prevent COVID-19.

“It is a known fact that I am not a fan of ASUU. This is simply because of their penchant for constant strike, which has elongated a four-year programme to between eight and 10 years in most of the public universities.

“However, this time, the union has my support on the account of their publication of the numerous problems afflicting public universities and the fact that the public universities don’t have the resources to meet the PTF conditions. Their position on these two important matters is part of their duties of ensuring that they don’t disseminate ignorance and half knowledge to their students, thereby producing a bunch of unemployable graduates.”

Babalola, therefore, called for adequate funding of education, so that teachers can be well paid while infrastructures, teaching aids and research grants would be readily available for them.

He advised the federal government to call ASUU, which he said is currently on an understandable strike because of lack of necessary facilities in most of the public universities, to negotiate with them, pay their salaries and equip the various public universities with a view to making them safe for reopening.

“The federal government needs to concentrate on the provision of the necessary infrastructures to make them attractive like their private counterparts,” he added.

Harping on the need for the country’s population be reduced to engender economic prosperity, Babalola advised the federal government to as a matter of urgency introduce a law on the maximum number of children a couple should have.

Kindly Share This Story: A primary school pupil and students were reported to be among…

ASUU Kicks against Reopening of Schools without COVID-19 Protocols