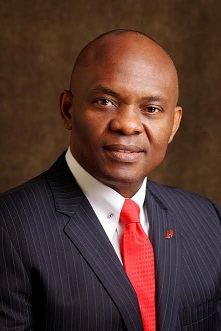 “Embrace legacy, you are not here forever,” Mr. Tony O. Elumelu, CON, Chairman of Heirs Holdings, and Founder of the Tony Elumelu Foundation, urged policymakers as he represented the African private sector at the opening session of the 2017 World Economic Forum on Africa which began in Durban, South Africa, on Wednesday May 3. “You must improve the business terrain to deal decisively with issues of joblessness and poverty,” he advised, “the environment is stifling, entrepreneurs provide their own water, their own transport, their own electricity, how are they going to succeed? “

Elumelu, who also chairs the board of Transcorp Plc with investments in power, oil & gas and hospitality, stressed the looming threat of widespread joblessness, labelling it the “greatest challenge for the continent”. His solution is straightforward: entrepreneurship development. Illustrating the power of entrepreneurship to transform economies, Elumelu recounted his own experience supporting entrepreneurs from 54 African countries.

Through the Tony Elumelu Foundation’s $100m commitment to African entrepreneurs in 2015, 3000 small businesses across Africa have been empowered so far, and Elumelu described their success stories with pride. “We have seen first-hand how SMEs create a multiplier effect where more youths are gainfully employed through the jobs created. To transform Africa, we must make doing business easy for them.”

As important as the private sector is, Elumelu and his co-panellists reiterated that the private sector alone cannot achieve much without the critical role government must play. For Elumelu, it is all about legacy: “If our political leaders embrace legacy and it guides them, they will fix Africa.”

Supporting him, Mr. Klaus Schwab, the Executive Chairman of the World Economic Forum, agreed that leaders must “act as the stewards of the generations coming behind them, think about their legacy and accept that they will not be in office for life.”

The theme for this year’s World Economic Forum on Africa (WEF Africa), “Achieving Inclusive Growth through Responsive and Responsible Leadership”, stems from the unanimous demand globally for leaders to be responsive to the demands of their people.