The Manufacturers Association of Nigeria (MAN) through its MCCI report disclosed that the manufacturing sector performance trajectory for Fourth Quarter of 2020 was positive considering the relaxing of the various COVID-19 lockdown and containment measures of the Government, until the End-SARS restiveness threw its fiery darts. According to the report, the End-SARS demonstration which was a weeklong holdup, no doubt, unleashed mayhem in the economy with distortionary effect on manufacturing. This, MAN noted, in constellation with the existing COVID-19 induced challenges that drew economic activities backward, particularly manufacturing. 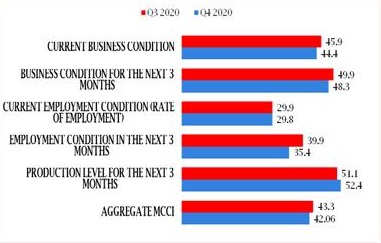 Consequently, MAN pointed out that in the last quarter of 2020, MCCI declined to 42.06 points from 43.3 points recorded in the Third quarter of the year; thus, indicating 1.24 points decline over the quarters.

Unfortunately, the report said the first quarter of 2020, the aggregate index has been below the 50 neutral points, thus, suggesting that manufacturers have low confidence in the economy and policy responses over the period.

It was further noted that the performances of the indexes of the individual Diffusion Factors were not different from that of Aggregate Index.  Analysis the data further disclosed that index of Current Business Condition declined by 1.5 points in the fourth quarter from 45.9 points recorded in the third quarter of 2020.

In the same vein, Index of Employment condition in the next 3 months declined by 4.5 points in the fourth quarter from 39.9 points recorded in the third quarter of 2020.

Conversely, however, Index of Production for the next 3 months also increased to 52.4 points in fourth quarter of 2020 from 51.2 points recorded in the preceding quarter; thus, indicating 1.3 points increase over the period.

Therefore, the poor performances of the indexes demand for better management of the macroeconomy; strategic support for the manufacturing sector to maintain production despite the intensity of the second wave of COVID-19; intentional initiatives to better control the spread COVID-19; and the building of institutional framework that will checkmate all forms of restiveness that can dislocate the economy.

How availability of Forex Impacts on Manufacturing Sector-MAN

Kindly Share This Story:….. most manufacturers not being able to adequately source FX for importation…