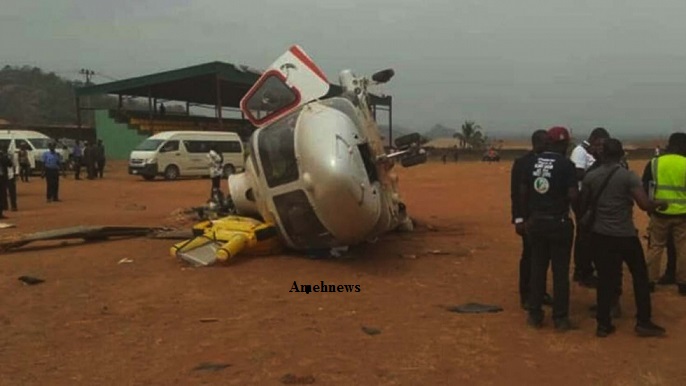 The Accident Investigation Bureau (AIB) Nigeria, has issued statements that the preliminary report on an Agusta Westland (AW139) helicopter with nationality and registration marks 5N-CML owned and operated by Caverton Helicopters Limited disclosed that a heavy brownout enveloped the helicopter and the crew lost visual contact with the ground.

AIB further gives details saying during the landing, at about 50 ft to touchdown, a heavy brownout enveloped the helicopter and the crew lost visual contact with the ground. At about 14:34hr, the helicopter touched down hard on the right main landing gear and rolled over to the right. The crew carried out Emergency Landing Procedures which included immediate engines shutdown, fuel shut OFF, battery switch OFF, and generators switch OFF.

The accident occurred on the 2nd February, 2019 in Kabba, Kogi Sta commenced its post occurrence assessments on the 3rd February 2019 under the provisions of Civil Aviation (Investigation of Air Accidents and Incidents) Regulations 2016 and International Civil Aviation Organization (ICAO) Annex 13.

Engr. Akin Olateru Commissioner/CEO while addressing the media at the agency’s Lagos office emphasised the fact that investigation had not been finalised.  ‘This report is not the final report, but facts gathered from the site of crash, witness statements, flight recorder and preliminary inspection’, he said

In a Press statement endorsed by the General Manager (Public Affairs), Tunji Oketunbi cited at website of the agency revealed that the purpose of this preliminary report is to provide details of the initial facts, discussions and findings surrounding the occurrence; which includes information gathered from witness statements, flight recorders, Health and Usage Monitoring System (HUMS) Data, Flight Data Monitoring (FDM) data, and preliminary inspection of the accident site and the wreckage.

The statement pointed out that the helicopter departed Abuja at about 13:46 local time for Kabba, Kogi State on a VIP chartered flight Nigeria 002 (NGR002), on a Visual Flight Rule (VFR) Flight Plan with 12 persons onboard, including the Vice President of the Federal Republic of Nigeria, Professor Yemi Osinbajo and his entourage along with three crew members (Captain, Co-Pilot and an Engineer)

“All occupants of the helicopter were evacuated uninjured. The helicopter was substantially damaged. Weather was reported to be good.

“From the report findings, the helicopter had a valid certificate of airworthiness. Caverton Helicopters Limited however did not conduct site survey of the landing field prior to this flight and did not carry out safety and risk assessment of the landing area prior to dispatch of the flight. The flight crew were properly licensed and adequately rested to operate the flight.

tions to Nigerian Civil Aviation Authority (NCAA) and Caverton Helicopters. NCAA should issue an Advisory Circular to all helicopter operators flying in Nigeria to be alert to the possibility and the effect of brownout. Appropriate procedures should be put in place to mitigate its effect(s).

“AIB also recommended that Caverton Helicopters Limited should ensure that flight operations are carried out in accordance with the company’s approved operations manual, vis-a-vis site survey and proper safety risk analysis are done before dispatching any helicopter to unapproved landing pads.