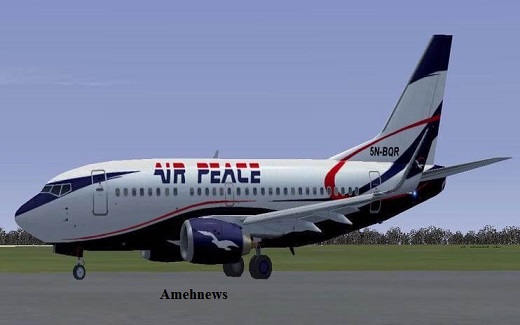 Air Peace crew members on Monday foiled an attempt by two women to traffic a three-month-old baby boy on the carrier’s Lagos-Banjul flight.

An attempts by one of the suspected traffickers, according to THISDAY, who claimed to be the baby’s mother, to soothe him failed.

An informed source disclosed that when the crew members suggested to the suspected trafficker to breastfeed the baby, she declined.

Scared that the baby’s cries were attracting attention, the woman who claimed to be his mother requested for water from the crew.

The crew, however, noticed that the alleged mother was fumbling in giving the baby the water.

Also the paper reported that the name of alleged mother of the baby was Mrs. Ibeneme Edith Omon Anthony.

The airline said the alleged trafficker had a return ticket (Banjul-Lagos-Banjul) and disclosed that she travelled into Lagos from Banjul alone.

She, however, added the baby boy whose name was identified as Prince Dominion David Anthony, to her ticket when leaving Nigeria on Monday.

Mrs. Anthony was accompanied by one Mrs. Andy Emrald Bassey who claimed to be a pastor.

Informed source from the flight narrated that when suspicion grew that the baby was either stolen or being trafficked, the crew summoned the alleged traffickers to the back of the aircraft for questioning.

They allegedly told the crew members that the baby was a child from a surrogacy arrangement.

Dissatisfied with the response, the crew notified Air Peace team at the Banjul International Airport in The Gambia of the development.

When the flight landed in Banjul, Air Peace staff accosted the two alleged traffickers and the two women were separately questioned.

They gave conflicting accounts of how they came about the baby.

Furthermore the reports quoting the Air Peace staff in Banjul quickly called for the intervention of Banjul International Airport (BIA) Police Station and the suspected traffickers were promptly arrested.

A source alleged that medical tests conducted by security operatives in Banjul showed no relationship between the baby and the woman who claimed to be his mother.

The alleged father told the police that the DNA test would be conducted in Nigeria, it was learnt. A source told newsmen that The Gambia Police rejected the alleged father’s decision to do the test in Nigeria, insisting they could not trust the medical result from the country. Police in Banjul, reporters were told, insisted on the DNA test must be conducted in The Gambia.

The Nigerian High Commission in The Gambia is said to have been informed of the incident.