The firm disclosed this at the weekend stating the organisation 60 per cent of its operations as a result of loss of revenue due to the closure of airports in the country towards combating the spread of the Covid-19. 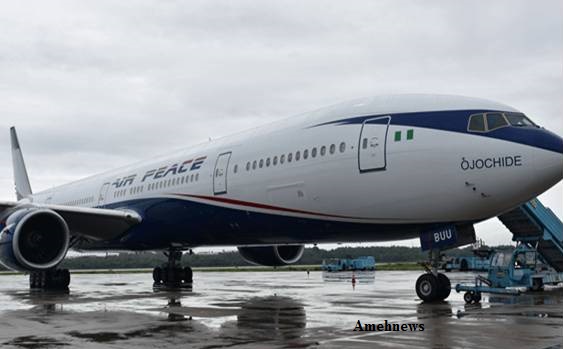 Chief Executive Officer, Air Peace, Mr. Allen Onyema during a webinar masterminded by Aelex Partners tagged: “Survival Strategies for Nigerian Airlines” said the downsizing would entail a decrease in the number of flights on a daily basis.

He also added that aircrafts will be deployed for effective use pending when things could pick up.

Onyema maintained that there will be no in-flight service again onboard its domestic flights across its routes network while activities of its workforce will also be affected.

He noted during the programme that the downsizing plan will affect some of the workforce activities adding that some staff maybe asked to stay home until things pick up.

Onyema further pointed out that few of its aircraft would be deployed at resumption and the number of flights would equally be reduced respectively.

“Passenger figures are not going to be the same again like what it used to be years back, everything has changed, so going into operations, a new set of regulations will emerge,” Onyema said.

He, however, noted that with the reduction in the number of flights, few staffers would be needed.

He averred that on resumption, passenger traffic would be low due to fear passenger may entertain regarding air travel and to this end; a lot sensitisation needs to be done towards encouraging people to take flight again.

Onyema hinted that Air Peace, with the downsizing isn’t  sacking any employee but would be brought back when flight increases.

According to him; “even we at Air Peace, we are going to downsize, I expect every airline to downsize because the passengers are not going to be there in the beginning, it will take time, so if you push out all your planes, you have yourself to blame”.

Onyema also posited that employees must understand that the airlines have to stay afloat and reorganise its business for profitability in order for them to participate actively.

He buttressed that workers who might be affected by the downsizing should see it as sacrifices for the business to be stable.

“So, what happens to the staff? I suggest that what airlines should do because you cannot pretend that you can carry all of them the same time, when you go down, they go down finally and permanently and forever, no hope for survival again.

“So even the staff must understand that they have a collective Commonwealth which is the airline and that the airline must survive for them and their family to survive and to make the airline survive, sacrifices must be made at this point in time, airlines must downsize their workforce.”

Kindly Share This Story:The attention of the Manufacturers Association of Nigeria (MAN) has been drawn…