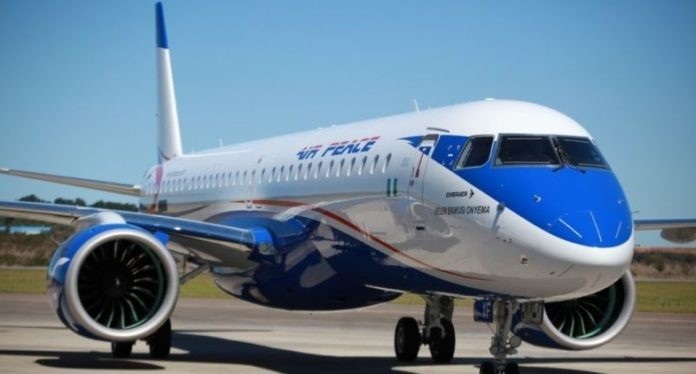 Chairman of Air Peace, Allen Onyema has said that 13 brand new Embraer E195 the airline just acquired would create no fewer than 8,000 direct jobs in the aviation industry.

Onyema made this known Friday as Air Peace took delivery of the first of its thirteen (13) firm orders of Embraer E195-E2 which arrived the Nnamdi Azikiwe International Airport, Abuja from Recife airport, Brazil at about 01:49pm yesterday.

Air Peace is the first African carrier and second globally (following Lufthansa which ordered 35) to take delivery of this brand new aircraft type in with 30 requests , which include 13 firm orders and 17 purchase right orders

The Air Peace Chairman further thanked the President of Nigeria, Muhammadu Buhari for making the delivery of the ordered plane possible stating that he was gracious that the airline would not pay Value Added Tax (VAT) and Customs duties on the new planes, thus stating that it is big financial burden lifted.

He also thank the Minister of Aviation, Senator Hadi Sirika for his tireless support and encouragement to Nigerian airlines, noting that it was in response to his challenge of the airlines acquire new planes that spurred Air Peace to order the new aircraft.

The Air Peace Chairman also thanked the National Assembly Committees on Aviation for facilitating the passage of the waiver to airlines, adding that the 13 aircraft create 8000 jobs for Nigerians.

Minister of Aviation, Senator Hadi Sirika who was at the occasion described the aircraft delivery by Air Peace as a step in the right direction stating that the bold step by the airline aligned with federal government’s road map for the aviation sector.

The Minister said the use of newer airplanes by Nigerian carriers will change the dynamics in airlines’ profitability and sustainability; by driving down maintenance and fueling cost.

In a speech, the Brazilian Ambassador to Nigeria, Ricardo Guerra de Araujo, said the feat of Air Peace was a remarkable for Nigeria and Africa, as Air Peace is the launch customer of this aircraft type in Africa.

The ambassador also expressed optimism that Air Peace would consider direct flight between Nigeria and Brazil.

Speaking about the aircraft type, the President/ CEO, Commercial Business Aviation, Embraer, Mr. Arjan Meija, said “The E195-E2 tagged Profit Hunter aircraft will help Air Peace achieve its ambition of connecting not just all of Nigeria, but the whole of the African continent, while feeding long-haul flights from their Lagos hub.

“Air Peace is also the first airline to configure a premium cabin with our staggered seat option. Each of the 12 Business Class seats is slightly offset from the other to give more space and privacy. There are three rows of seats arranged two-by-two at 51-inch pitch at the 124 seater aircraft. Passengers by the windows have unobstructed access to the aisle; they don’t need to awkwardly step over their seatmates or ask them to move.

Meija also said there are large overhead bins on both sides of the aircraft, which is different from other configurations that have a narrow bin along one side of the premium cabin that transitions to a larger bin at the start of the economy cabin.