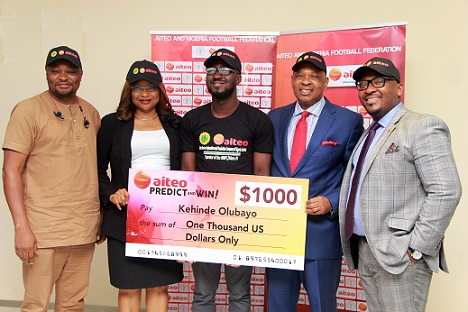 The management of Aiteo Group, Nigeria’s foremost oil and gas company, has pledged to contribute the sum of N10 Million for every goal recently scored by the Super Eagles against the indomitable Lions of Cameroon. This donation is to be applied towards the treatment of the team’s goalkeeper, Carl Ikeme, who was diagnosed with acute leukaemia in July 2017.

This pledge is the second made by the energy giants prior to each of the games against Cameroon, the first being on Friday 1 September when the Group had also committed to N10 Million for every goal scored against the same opponents.  The Super Eagles of Nigeria scored four (4) un-replied goals against Cameroon in Uyo, Akwa Ibom State on that occasion, and the team’s subsequent one-all draw against the Lions in Yaounde resulted in a total pledge of N50 Million. The cheque will be presented to the team when they open camp in the prelude to their 7th October World Cup qualifier against Zambia in Uyo
.
The recent outstanding performances of the Super Eagles have been attributed to the financial stability the team now enjoys. Many of the team’s key financial needs are being addressed by the N2.7billion sponsorship deal between the Nigeria Football Federation (NFF) and the Aiteo Group which is ensuring that major outings of both the senior men and women national football teams will be extensively supported by the Aiteo Group for the next five years.
“Our ambition is to boost the performance of the Nigerian teams and return the country to the position of dominance in African football,” said Mr. Benedict Peters, Executive Vice Chairman of the Aiteo Group.
On the donation to the treatment of goalkeeper Carl Ikeme, Mr. Peters added that “…We are happy with the progress the Super Eagles are making, and are looking forward to having Ikeme return to action for the national team soon.  This is our way of showing support for the team and the goalkeeper in particular. As a company, we are interested in the things that integrate and unite Nigerians, and we know that football is at the core of our national pride and international diplomacy.”