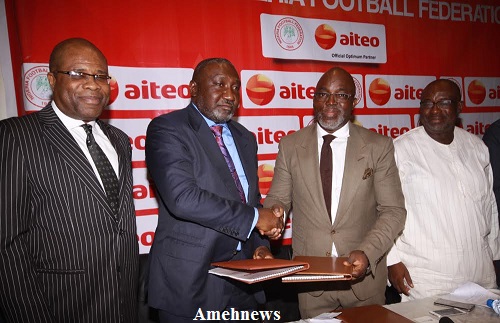 In April 1994, the Super Eagles (then named the Green Eagles) placed fifth in the FIFA World Rankings, the highest ever achieved by an African football team. The achievement was hardly a surprise to sports buffs. The team was notable for recording successive wins that endeared them to fans locally and internationally.
At the USA ’94 World Cup, they gave their foreign counterparts a run for their money due to their professionalism. In fact, their performance was so remarkable that they were renamed the Super Eagles.
Over two decades down the line, the success story has been rudely cut short. Mismanagement and corruption have continued to bedevil the growth of the sport, affecting the professionalism of the team and dampening their morale.
The Nigerian Football Federation (NFF) takes the blame for this state of affairs, since it is primarily charged with organizing domestic and international football in Nigeria. In the past 10 years especially, the national football body has been enmeshed in leadership crisis which has manifested in the recruitment of inferior foreign players, tribal considerations in the selection process and non-payment of salaries and allowances. Small wonder, then, that the majority of our teams have set their sights abroad for greener pastures while local football is struggling for survival.
Agreed, the NFF is not solely to blame for the incessant hiccups; the Federal Ministry of Youth and Sports also has a key role to play in sports development. But the average Nigerian is not necessarily interested in the blame game between both sports bodies. What we want is a fully functional team that will do the nation proud in sports tournaments home and abroad consistently, not by fits and starts.
Over the years, several setbacks have held the growth of Nigerian football hostage, but non-payment of salaries due to the national team and their coaches has been particularly worrisome. When Samson Siasia was in the saddle as coach, he was very vocal about this problem. So it was most unfortunate to hear that late coaches Stephen Keshi and Shuaibu Amodu were owed a backlog of salaries up until their demise. Unfortunately, there is only so much we can achieve in football if collectively as a nation we are unable to meet the basic needs of the teams that do us proud on the world stage.
Advertisement

Recently, the bubble burst when news went viral that the Super Eagles’ new coach Gernot Rohr was owed his salaries for January through March, 2017 amounting to $141,000 because the NFF was broke. It was even more shocking when the NFF admitted it had no idea how to pay the bonuses and allowances of our national team during the Africa Cup of Nations and World Cup qualifiers. Consequently, the NFF was said to be in talks with three unnamed companies to manage the payment of Rohr’s salary.
When all this is considered, our team’s abysmal failure to qualify for the 2017 edition of the Africa Cup of Nations (AFCON) should hold no surprises for anyone. After all, if they remain unpaid for the services they offer the entire nation at the cost of their livelihoods and personal health, they would naturally lack the morale to give their level best in the game.
Amidst this back and forth, the recent announcement of integrated energy group Aiteo’s 5-year sponsorship of the Super Eagles was a breath of fresh air. The N2.5 billion sponsorship, unprecedented in recent times, is aimed at boosting the morale of the national team and meeting their coaching, staffing and other technical needs. It will be disbursed in N500 million tranches annually to the Super Eagles through the NFF, as part of the sponsorship agreement between both parties.
The deal makes Aiteo Group the ‘Official Optimum Partner of the NFF’. The funds shall be disbursed on a quarterly basis via a financial agency, and the other cadres of the national team shall share whatever is left after the Super Eagles have been covered.  Unlike previous sponsorships, the accounts will be open to periodic auditing to guard against misappropriation of funds. Aiteo Group has even expressed its willingness to extend the sponsorship to the National Football League depending on the success of the current deal.
Aiteo Group deserves all the kudos it can get for this timely CSR initiative. The sponsorship deal is impactful and likely to change the face of Nigerian football as we know it. It is even more commendable when we consider that Aiteo is a player in the energy sector, not telecommunications from which most major football sponsors have been drawn in recent times. This is what CSR really means when all is said and done. It is about initiatives likely to impact not just a small crop of people, but the generality of the populace. After all, football is one sport that unites us as a nation despite our tribal differences. Other corporate bodies would do well to follow suit.
Understandably, some Nigerians may be a bit skeptical about this since previous sponsorship deals fronted by other companies have been run aground while our teams have been left high and dry. However, in Aiteo Group we have a company with the financial capacity and moral will to follow through its contractual obligation with the NFF without fail, and I think they deserve all the support they can get.
In the final analysis, the Aiteo/NFF deal is a beacon of hope to not only the Super Eagles but Nigerian football in general. Nigerians have taken to the social media to commend this effort, and rightly so. Aiteo Group has expressed its intentions to sponsor every cadre of Nigerian football, beginning with the Super Eagles if all goes well. In the next few weeks and months, we can be sure that the usual excuses offered by every party involved in satisfying the yearnings of our national team and sports-loving Nigerians will cease and the team can concentrate on being world giants again.
Amadi is a Warri-based sports enthusiast