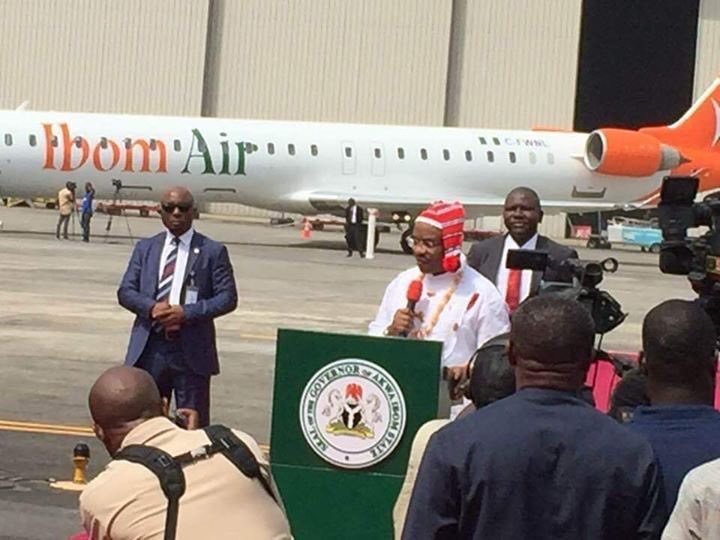 As part of the industrialisation policy of the Governor Udom Emmanuel administration, the Akwa Ibom State has taken delivery of three aircraft for the take-off of Ibom Airline.

Speaking at the inauguration of the aircraft at the Victor Attah International Airport in Uyo yesterday,  Emmanuel said the airline was a monumental achievement in the state.

He said the aircraft, C-FWNK is only six years old with a sitting capacity of about 90 persons and constitutes the newest and modern fleet of the Canadian airbus.

He said  that Akwa Ibom is the only state in the country to run a state-owned airport and run an airline, adding that the government is running Ibom Air as a business.

He said Ibom Airline will operate routes that would give preference to Akwa Ibom people, and that the government would soon launch one of the best terminal buildings in the country.

He said the government is  focussing on development of the economy on land, air and water, saying so far, the government has constructed over 1,000 kilometers of roads across the state.

Governor Emmanuel said one other aircraft would arrive on Friday in addition to the already unveiled two, pointing out that the Ibom Deep Seaport will soon commence operations before the expiration of his second term in 2023.

He said the launching of Ibom Air is a monumental achievement in Akwa Ibom and indeed Africa. The journey to achieve Ibom Airline started in 2016 and today, it is a reality.

“If we were to search the minds of people, this day would have been frustrated but we give glory to God for making this day a reality.

“I want to charge my people that we can achieve a lot if we come together. This is the only state across the country that runs and operate an international airport. We are the only state that runs a category two runway.

“I want to reassure the former governor, Obong Victor Attah that very soon the MRO will be a place that will maintain fleet of aircraft across the country,” he said.

We are running Ibom Air as a business, paying particular attention to Akwa Ibom people,” he said.

The Senate President, Bukola Saraki, who was the first passenger that arrived the airport in the new aircraft, unveiled the airplane and commended the leadership qualities of the state governor, noting that he has been able to create an environment viable for development.