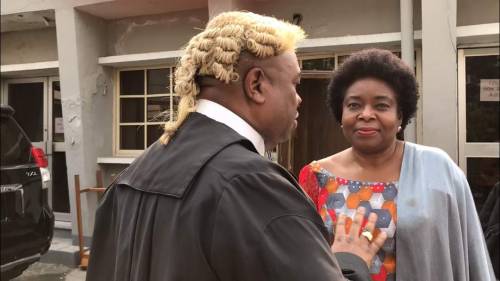 A former Minister of the Federal Capital Territory (FCT) Jumoke Akinjide has accused the Economic and Financial Crimes Commission (EFCC) of coercing her to return the N650million that she is accused of laundering.

She prayed Justice Chukeujekwu Aneke of the Federal High Court in Lagos to compel the anti-graft agency to return the money to her.

The EFCC is prosecuting Akinjide alongside two Peoples Democratic Party (PDP) chieftains, Ayo Adeseun and Olanrewaju Otiti, for an alleged fraud of N650million.

The anti-graft agency alleged that she collected N650million from a former Minister of Petroleum Resources, Mrs. Diezani Alison-Madueke, in the build-up to the 2015 general elections.

But in a fresh application by her lawyer, Chief Bolaji Ayorinde (SAN), Akinjide said she had already been coerced by the EFCC to return the N650million.

She prayed the court to quash the charges against her for being an abuse of court processes.

She said no prima facie case of fraud was disclosed against her in the proof of evidence filed before the court by the EFCC.

Akinjide said contrary to the claim by the EFCC that she collected N650million from Mrs. Alison-Madueke, the money was actually from the fundraiser organised by the Peoples Democratic Party to fund the re-election campaign of the then President Goodluck Jonathan and Vice- President Namadi Sambo.

She claimed that the EFCC was aware that such fundraising was legal and normal under the Electoral Act 2010; and that the All Progressives Congress(APC) also conducted a similar fundraiser and realised N50billion, which it used to fund the electioneering campaign of its presidential candidate, Muhammadu Buhari, and his running mate, Prof Yemi Osinbajo.

She said while PDP members were being “harassed, charged or prosecuted” over the money realised from its fundraiser, “none of the members or candidates of the APC was charged from the conclusion of the 2015 general elections till date on the basis of the N50billion fundraising.”

Akinjide said she handled the N650million in her capacity as the Oyo State Coordinator of the Goodluck/Sambo presidential election campaign in Oyo State, adding that “the money was distributed to various groups and sub-coordinators of the PDP in Oyo State as directed by the party in order that the funds may be further distributed to party agents and other workers in the campaign organisation.”

“No single individual received sums in excess of N5m from this political chest,” she said.