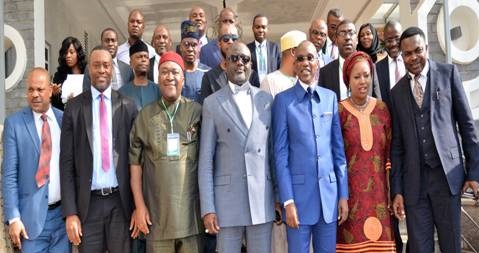 The Chairman of House of Representatives Committee on Banking and Currency, Hon. Sir Jones Chukwudi Onyereri has disclosed that the House of Representatives of the Federal Republic of Nigeria is currently working at amending the Act establishing the Asset Management Corporation of Nigeria (AMCON). He said the proposed amendment would further empower and embolden AMCON to go after its debtors especially those who hitherto think they can ride on some loopholes in the Act as is to perpetually engage AMCON in court.

Hon. Onyereri made the disclosure in Abuja at a one-day technical session with stakeholders such as the Central Bank of Nigeria (CBN); Nigeria Insurance Deposit Corporation (NDIC) and members of the House Committee on Banking and Currency; AMCON management among others where the challenges inhibiting AMCON from recovering were extensively discussed. The committee also used the occasion to listen to presentations from the representatives of the CBN, NDIC and legal luminaries among others on how AMCON could function optimally as well as meet its mandate before sunset.

Speaking at the forum, Managing Director/Chief Executive Officer of AMCON, Mr. Ahmed Kuru who was frank and blunt at the technical session described his assignment at AMCON as “very difficult,” but said there was need to change the recovery approach at the Corporation with the backing of the National Assembly especially since the remaining crop of AMCON debtors are defiant, recalcitrant and business heavyweights who have the financial wherewithal to repay their debts but have refused to pay by going to court to tie AMCON up.

The AMCON Boss said, “We have been doing this for the past seven years and we have realised that what we need now at this time in the life of AMCON is legislative help that would make it possible to recover these debts effectively and efficiently. At AMCON, we believe that the Act establishing the Corporation can be amended as many times as possible by the National Assembly as long as they think it is appropriate to do so in the interest of the Nigerian economy. Given the difficulties we are facing presently, we are of the opinion that the Act establishing AMCON should be amended to reflect our sunset period.

“We are making this suggestion because we have over the years realised that some of our obligors have since established another lifestyle that are different from what brought them to AMCON so the best we can do as a law abiding agency of the government is take them to court. But the wheel of justice grinds slowly in the country so something drastic must be done if we all want AMCON to meet its mandate at sunset. So we suggest that the National Assembly amends the Act establishing AMCON in such a way that the assets of the obligor(s) are automatically transferred to AMCON. From what we know, some of the obligors are working hard to ensure that the cases they have with AMCON in different courts outlives the lifespan of AMCON.”

The National Assembly, which in the first place created AMCON in 2010, Kuru argued must do everything within its constitutional powers to protect the Corporation and pay more attention to AMCON sunset to enable AMCON fully recover the debts from the hard-core obligors who would stop at nothing to frustrate both AMCON, the National Assembly and the Nigerian populace. Kuru said he was appealing to the lawmakers because if at the end of the day AMCON did not realise its mandate as expected, the heavy obligation of AMCON would continue to rest on the shoulders of the Nigerian state while the few individual debtors that owe the bulk of the debt of AMCON would continue to live large to the expense of Nigerian tax payers. TheAMCON boss however assured the committee that the incumbent management of AMCON would remain prudent and would continue to persevere in the face of adversity posed by AMCON obligors and the challenging economic realities in the country.

Again Kuru said, “Our recovery assignment is a difficult one and in recent years business has been quite challenging in the country. For that reason, we are sitting on a lot of assets because of the unstable liquidity situation and as you know most of our assets are challenged one way or the other. But we are hopeful that things looking up in 2018, meaning that AMCON’s projections too looks positive. However, we will continued to be prudent in terms of our spending and running cost generally. But at the end we will continue to insist that to meet our expectation at sunset, we do expect a lot of amendments of our Act as is from the national assembly. Once we have that backing, I assure you that AMCON would meet your expectations.”

Hon. Onyereri who chaired the technical session however reassured that the national assembly has also been monitoring the behaviour of AMCON obligors, which he said he was sad to state that some of the obligors are not just enemies of the state but those who do not mean well for both the economic efforts of the present administration and that of the Nigerian nation as a whole. He said that the national assembly would not leave any stone unturned until the AMCON Act is amended to speed up recoveries.

He said, “On February 20, 2018, we also held a public hearing on the AMCON Amendment Bill and during the hearing, we received a lot of inputs from stakeholders, invited guests and AMCON. Because of time limitation and the nature of submissions received at the public hearing, the committee felt that there is need to hold this technical session in order to give everyone involved the opportunity to properly analyse the Bill and give it the proper attention it deserves. This is why we have set-aside today for this technical session-dedication the entire day on this all-important Bill. This is an opportunity to once and for all set AMCON on a proper footing to effectively achieve its mandate.”

Hon. Onyereri reminded the technical session that AMCON was created in 2010 to assist the Nigerian financial sector achieve stability by buying toxic assets of Eligible Financial Institutions (EFIs); meaning that AMCON was not set up to exist in perpetuity as that would unwittingly create a moral hazard by giving banks in the country the erroneous impression that AMCON would always be there to bail them out. According to him and going by the plans of the national assembly, AMCON will have to end and must cease to exist at some point. But before it (AMCON) winds up its activities, it needs to achieve its mandate within the defined lifespan. He said unfortunately, the debtors are also aware of this and are now doing everything possible to outlive AMCON, which according to him, the national assembly would not allow.

He added, “After 8 years since the creation of AMCON, an appraisal of AMCON’s recovery efforts is imperative, which is why the technical session was convened. The AMCON Act needs to be reviewed and amended in order to give AMCON more bite to enable it go after recalcitrant debtors of the corporation. As I mentioned in my speech at the public hearing, there are certain looppholes in the extant Act, which are being taken advantage of by certain debtors and obligors to circumvent AMCON’s loan recovery efforts. There are equally other challenges being faced by AMCON in its loan recovery efforts both from EFI’s who fail to provide AMCON with necessary information and financial records of debtors to enable AMCON recover these funds and challenges from recalcitrant debtors who device all manner of ways to circumvent the law and frustrate AMCON.

“…Therefore there is a need for paradigm shift in AMCON’s debt recovery efforts and this amendment would go a long way in achieving that. Let us be clear on this, there is deliberate reluctance and outright refusal by these debtors to settle their debts. Unless AMCON is given appropriate powers through legislation, it will not succeed. We need to remember that the Federal Government guaranteed AMCON’s bond. So unless something is done, this could be a source of economic instability in the country, as a default by AMCON on its debt will have an adverse effect on the country’s economy,” Hon. Onyereri concluded.

COVID-19 and the boom in the digital economy in Nigeria

TCN to Carry Out Routine Maintenance in Itire Transmission Substation

How future breweries will capitalize on yeast innovation