In what seemed like an x-ray of the newly amended 2019 AMCON Act, which was recently signed into law by President Muhammadu Buhari, a legal consultant and Senior Partner, Olaniwun Ajayi -LP, Mr Muyiwa Balogun has challenged the Asset Management Corporation of Nigeria (AMCON); Asset Management Partners (AMPs) and the Inter-Agency Presidential Committee set up by the federal government to leverage the 2019 Amended AMCON Act, to recover the over N5trillion outstanding AMCON debt before the corporation’s sunset. 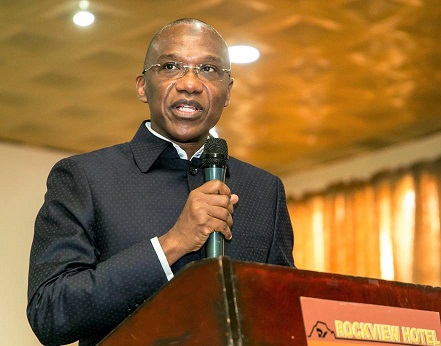 Balogun who made a case in support of the 2019 Amendments while addressing external solicitors and AMPs of AMCON in Abuja further painted a gloomy picture of what could further befall the already challenged Nigerian economy if the debts were not recovered in good time before the sunset period. According to him, AMCON debt could easily rise to a whopping N6.6trillion by 2024 because AMCON still owes the Central Bank of Nigeria (CBN) N4.5trillion and also battling with N1.7trillion of Assets Under Litigation (AUL).

Given the fact that the debt will eventually become the burden of the federal government and by extension taxpayers, he argued that the is need for speed in recovery just as all hands should be on deck to ensure that AMCON recovers the debt as mandated by the new amendments. He said it was immoral to allow the obligors go without punishment especially since both the Holy Bible and the Quran, which incidentally are the dominant religions in the country abhor people who borrow without the intention to pay back.

According to Balogun, “The Bible in the book of Psalm 37:21 said, “The wicked borrow and do not repay.” In Proverbs 22:27, the Bible also said, “If you have no money to pay, even your bed will be taken from under you…” The Quran on the other hand in Surat Al-Baqarah: 280 – 282 said, “Whoever borrows money and he intends not to repay it off is a thief.” Backed by these, he stated that there are no legitimate means adopted by AMCON and its agents to recover the debt as empowered by the Amended AMCON Act that can be termed as draconian.

The process needed the additional powers, according to Balogun because AMCON operating at 100 per cent efficiency to realise the available collaterals would still face a 68 per cent gap to plug the unrecovered exposure meaning that to plug the gap, AMCON should do whatever it takes including aggressively pursuing both primary and secondary obligors. From his argument, it is only debtors that would have issues with the new amendments because those who mean well for the Nigerian economy will rather see the act as one that has come to enhance AMCON debt recovery capability and improve supporting regime for enforcement.

Balogun also expressed satisfaction with what he called the ‘key pillars of the 2019 amendment,’ which include tracing and tracking debtors hidden funds; naming and shaming recalcitrant debtors and making contracting with government subject to good standing with AMCON; holding selling Eligible financial institutions to their loan sale obligations and giving teeth to claw back rights and checkmating debtors’ legal gymnastics and exploitation of legal technicalities to frustrate recovery. Other key pillars include, fast tracking the hearing and determination of AMCON cases, enhancing AMCON’s rights over collateral securing Eligible Bank Assets (EBAs) from security interest to legal title; fine-tuning AMCON’s special powers as well as prescribing a sunset date.

AMCON Managing Director/Chief Executive Officer, Mr. Ahmed Kuru, said even though obligors of AMCON have been working hard to stretch AMCON to the sunset period, the corporation, under his leadership is determined to achieve its mandate within the limited time available (and within the law). He stated that the amended act indeed provided additional powers to an already strong act of AMCON as some obligors who hitherto were hiding from their obligation are now coming out to see how their debt can be resolved. He however added that the amendment can only be effective to the extent that solicitors of AMCON understand the Act and thereafter utilize the far-reaching powers that have been vested in the Corporation to help AMCON and Nigerian recover the debt.

Kuru added that even though the process of amending the act was a challenging process, he said AMCON owes a debt of gratitude to the National Assembly and indeed President Muhammadu Buhari, GCFR for their courage and for putting the issue to rest and accomplishing this feat.