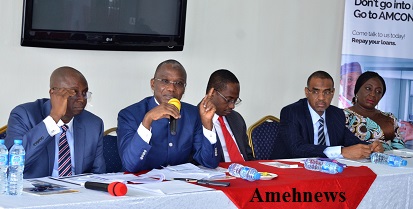 Managing Director/Chief Executive Officer, Asset management Corporation of Nigeria (AMCON) Ahmed Kuru has said that AMCON is in the process of dealing decisively with the top assets in its portfolio just as he hinted that Corporation has indeed stepped up its recovery drive in line with its fast approaching sunset. Going by the new stance, the AMCON boss hinted that all obligors of AMCON especially the politically exposed individuals and business heavyweight who hitherto thought they were untouchable will not be spared in the enforcement process that are being fine-tuned by the recovery agency.

Kuru who was fielding questions from journalists at Westwood Hotel, Ikoyi, Lagos at the weekend, where he also disclosed that AMCON has officially released its 2017 Audited Accounts said as a result of the new recovery strategy, AMCON is restructuring its operational processes to enable it go after these crop of recalcitrant debtors in a manner that has never been witnessed before in the country. But in doing so, AMCON not operate outside the laws of the Federal Republic of Nigeria as well as the AMCON Act 2010, as amended.

He said, “I want Nigerians to understand that our assignment at AMCON is not just tough but a daunting challenge so we actually deserve the support of the media and that of the general public. I think people need to pity us because we are at that stage in the life of the Corporation where we are dealing with the hardcore because the low hanging fruits have been dealt with earlier in the life of AMCON. I want you to understand that we are sitting on a substantial amount of assets, which we must one way or the other resolve on or before our sunset, which is around 2023/24.”

Kuru, said it was important for the media to have a full understanding of the magnitude of the challenges faced by AMCON because it will enable them understand the fight the Corporation is up against especially with the individuals who heavily borrowed money from banks with no intention to repay, which contributed in no small way to destroying the Nigerian economy. He insisted that AMCON played strategic role in rebuilding the Nigerian economy with the recapitalization of the banks, which he said preventing systemic collapse of the economy. He said it would have been unimaginable what would have happened to the Nigerian economy if AMCON did not intervene at the time it did.

For that reason he said, AMCON is determined to pursue every obligor in its book with all the powers the laws avail AMCON to deal with each and every one of them especially the 350 debtors of AMCON who account for almost 80 per cent of the over N5 trillion huge debt burden, which must be recovered because AMCON borrowed to purchase the Eligible Bank Assets (EBAs) during the first and second phases when it bought over the bad loans from the banks.

He continued, “Like I said earlier, we will deal with some of those key assets very soon like the Peugeot Nigeria Limited in Kaduna, CDL, Aero Contractors, Arik Air and a host of others. But I must tell you, as we close in on these individuals and entities that owe us, I want you to know that they will call us names, they will blackmail us, they will threaten us, malign and harass us. However, I can tell you that hard as they will try, we will not be deterred in going about our normal duties as mandated by law. But as we do, we ask ourselves first if the action will stand right before God Almighty; secondly, will the action be in our national interest and, is our action within the rule of law. If the answer to these three guiding principles is yes, AMCON takes decisions. It is nothing personal.”

On the 2017 Audited Account, which he described as better than 2016, he said although the Corporation was not established to make profit like commercial banks, it could still return to profit this year after losses in 2017 narrowed as the economy rebounded from its worst contraction in more than two decades. The loss for the year through December improved to 16.4 billion naira ($45.3 million) from 164.9 billion naira in 2016. What that meant is that, if the economy continues with a positive outlook as it currently experienced in line with the expectations of the Federal Government, AMCON would be expected to return to profit at the end of the 2018 financial year.

AMCON’s current performance is in stark contrast to 2016, when Kuru also hinted the media that the weak economy hindered efforts to recover loans and other assets in its hold. AMCON had acquired 12,537 Non-Performing Loans (NPLs) worth 1.7 trillion naira from 22 financial institutions, following the 2009 banking crisis. Gross earnings also increased by 23 per cent to 341.8 billion naira, which is a 21 per cent increase in interest income to 42.6 billion naira as well as the 41 billion-naira sale of Keystone Bank helped boost performance even as operating expenses rose by 16 per cent.

AMCON Executive Director Operations, Aminu Ismail earlier stated that AMCON’s costs were “driven” by an increase in the price of aviation fuel and overhead expenses for two airlines it has taken over, which is Arik Air and Aero Contractors, according to the highlights of the 2017 results. Going by Kuru’s pronouncement, the 2018 financial year may be a very busy year for AMCON as a result of the proposed disposal of these lead assets such as Aero Contractors, PAN, Arik, Delta Queen, amongst others. 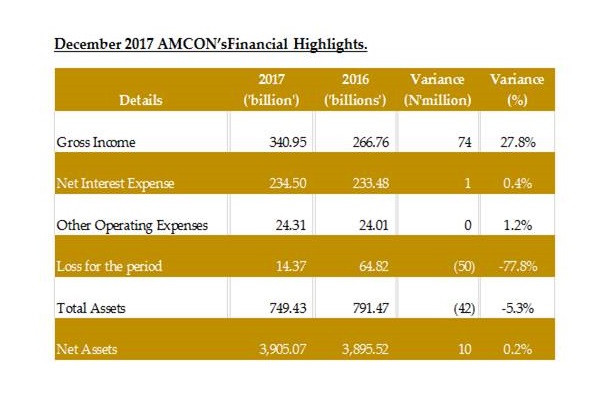 We Remit All Revenues Due to Federation Account – NNPC