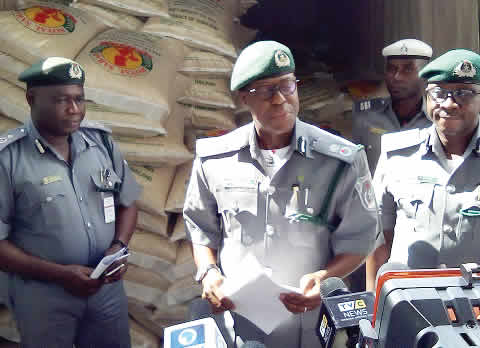 The Apapa Area Command of the Nigeria Customs Service has said it generated N61bn revenue in the first two months of this year.

The outgoing Controller of the command, Bashir Abubakar, who disclosed this in Lagos on Monday, said the feat was achieved by the drive of the officers in enforcing compliance in the operations.

“The command, between January 1st and March 14th, seized 24 containers of tomato paste and vegetable oil with duty paid value of N200,867,000. The export seat in the command made $2,505,076 and N765.3m on free on board,” he said during a ceremony where he handed over to Mohammed Abba-Kura as the new controller.

Abubakar, who described the incoming controller as a goal getter, said the good target of the command would be maintained.

He urged officers of the command to extend goodwill and cooperation to the new Controller while thanking them for a warm relationship during his stay in the command.

Abubakar had said at a press briefing that the amount realised was 95 per cent of the 2018 revenue target of N426.1bn.

“This also shows that the command collected N53bn above the revenue generated in 2017,” he said.

Abubakar attributed the success to the selfless stance of the officers and men as well as the support and back-up by the Comptroller-General of Customs, Col. Hameed Ali (retd.) and his management team.