Speaking at a stakeholders meeting hosted by the Nigerian Shippers’ Council, the Vice Chairman of the Presidential Task Force on the Restoration of Law and Order on Port Access Road said that sanctions awaits these residents, even as he stressed that the Lagos State Government frowns at  the development, as the residences do not have licenses and permits to do that. 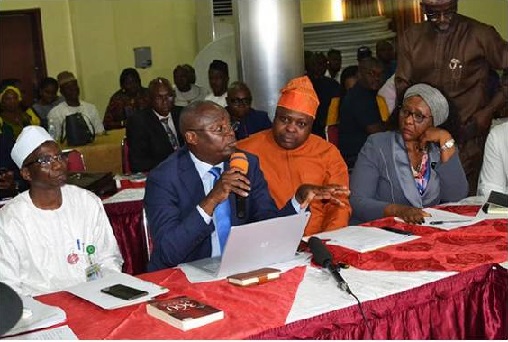 The Vice Chairman of the Presidential Task Force on the Restoration of Law and Order on Port Access Road, Comrade Kayode Opeifa has said that some residents in Apapa have converted their properties to container terminals,

Opeifa also said most of culprits are residents that are located along the waterways, adding barges move containers to these properties.

Confirming the development, Port Manager, Apapa Port Complex, Mrs Funmi Olotu alleged that most buildings along the waterfront are involved in these illegal activities.

According Olotu, none of these residents has the Nigerian Ports Authority’s permission to operate as such and as a result, these properties have been sealed and shut down.

Olotu explained that some of these illegal private jetty operators claimed that they had approval to operate, a development that made NPA take a tour of the facilities.

She said: “Some of them claimed that they were approved and so what we did was to take a tour of these places and we closed them down because these trucks were port-bound, that is our own argument.

“Whatever is happening anywhere, everybody is to gain access into the port, so if you are not ready to receive, do not approach us”, he said.

If you approach us illegally, we will turn you back, that is the only cardinal point we are holding onto.

“The moment you are not on our call up and you smuggle your way to approach the port from the port gate we will turn you back.”

Also, reacting to the allegation of some residents of Apapa converting their private properties to terminals, the President of Apapa residents association, Brigadier General, Ayo Vaughan denied the allegation.

He explained that what is happening in the area is that people from the commercial side of Apapa will buy properties in the GRA and be using it for some commercial works.

Meanwhile, Comrade Kayode Opeifa, said that the country is losing N25billion annually due to the inefficiency of the Lilypond transit park.

Opeifa who said at stakeholders meeting that Lilypond truck terminal was the major project the task force team is asked to undertake.

Explaining further, he said that until the Lilypond works perfectly well, the team will not be 70% good.

“Lilypond is the major critical thing this team was asked to do and without Lilypond we will not be 70% good.

“So one of the things we asked ourselves was to ensure that the Lilypond works. And if Lilypond doesn’t work, we will continue to lose N25billion by one company every two years”

Speaking further on the allegation of extortion he said, no member of the task team is collecting any money from anybody.

He however challenged anyone with any evidence of extortion to come forward.

“Nobody is collecting money from anybody, what we are experiencing is corruption fighting back, corruption is fighting back.  So we challenge anybody who has evidence of extortion to come out with it”, he stated.