The Managing Director, Nigerian Ports Authority (NPA), Ms Hadiza Bala Usman has expressed concern over the traffic gridlock in Apapa, which has affected access into the ports. 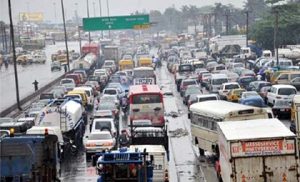 At a stakeholders meeting held in her office last week, Ms Usman said the bad access roads into Apapa is killing the trade facilitation programme of the government as it affects the smooth delivery of cargoes to importers.

According to her, NPA was not happy that all modalities and measure adopted so far had not translated into quick cargo movement in and out of the ports and assured the stakeholders that a positive action would be taken by the NPA in the interest of all and the economy.

“NPA is not happy that all modalities and measures adopted so far have not translated into quick cargo movement in and out of the ports,” the News Agency of Nigeria  (NAN)  quotes the managing director as saying.

She received the report on traffic decongestion of Apapa and its environs.

Usman told the stakeholders that the quick rehabilitation of the road remains a priority to her team to reposition the ports and salvage the economy.

While receiving the report on traffic decongestion of Apapa  and it’s environ, the Managing Director appealed to Messrs Dangote  Construction Nig.Ltd and the Management of Flowers Mills Nig Ltd to expedite action towards an early reconstruction of Wharf road as the rain is almost over.

Meanwhile, the NPA boss has also appealed to the Minister of Power, Works and Housing;  Mr Babatunde  Fashola  and the National Assembly to include the reconstruction of Creek Road linking Tin Can Island port in the 2017 budget appropriation.

This, she said, will ensure quick completion of the trailer park opposite the Tin-Can port  to keep the haulage trucks away from the road.

She also called for synergy between the Federal, state and stakeholders to find a permanent solution to the perennial gridlock on the road.

She urged port users to always subject themselves to the security checks at the gates leading to the ports and warned all unauthorised person intruding into the ports to stop or face sanctions.

NPA, she said, would soon introduce measures that will make it impossible for those without genuine business to access the ports adding that authority would continue to hold meetings with stakeholders to workout modalities on “measures” to be adopted to resolve the gridlock in the interest of all stakeholders and the nation’s economy.

The Federal Government, she said, is determined to find a lasting solution to the chaotic traffic situation along Apapa axis. Efforts, she said, were on by the Federal Government and the NPA to improve and sustain efficient road transport network within and around the ports to promote trade, improve cargo delivery and boost the economy.