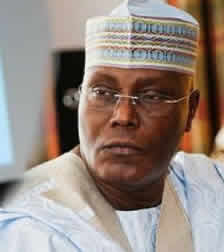 The All Progressives Congress has concluded plans to send its emissaries to former Vice-President Atiku Abubakar to find out his grievances against the party.

The party, The Punch gathered, might apply sanctions against the former vice-president over his alleged disparaging utterances against the party, if found guilty.

The Organising Secretary of the Adamawa State chapter of the APC, Ahmed Lawan, who disclosed this, said, ‘’Plans by  the state working committee to wade into the issue have been delayed by the participation of some members of the state exco, who travelled to Saudi Arabia to observe the hajj.

“ Some of our members, including the chairman of the APC in the state, are on hajj; we are only waiting for them to return and we are going to discuss this issue. Definitely, our meeting is going to dwell on Atiku, perhaps we may form a committee to reach out to the former vice-president to ask him what his grievances are. Definitely, if there’s anything we can do as a party at the state level, we will do,” Lawan said.

The party, according to him, has ways of dealing with any of its members, and if it finds sufficient grounds, especially with the rumours associated with the former vice-president, the party will not hesitate to take action.

While dismissing reported cracks within the party, he said the party was however worried by recent utterances credited to the former vice-president, including his remarks that the party abandoned him.

“The utterances of the former vice-president only portrayed him as a man whose sole motive for contributing to the success of the party is to profit from it, whilst it ought to have been selfless. We all sacrificed, nobody wanted to get something from it. If you want to contest, you wait for 2019 to test your popularity. If you are very popular, the people will listen to you and vote for you.  There’s no need for any utterance which is capable of portraying the party in bad light. We are very surprised that the former vice-president came out to say the party didn’t reward him, which is like saying the party didn’t reward him enough. We all sacrificed, nobody did it because we wanted to get something out of it.”

On the mode of the planned meeting with Atiku, he said, “When our committee meets him, if definitely what he’s saying is against the party, the party is going to take action on it;  but if he lodges his complaints and the party feels there’s merit in what he’s saying, then definitely the party will look into it.

“But for now, we are waiting for the members of Exco to come back. We will summon a meeting and then take a decision,” Lawan said.