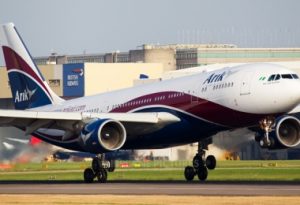 A Nigerian plane made an emergency landing in Ghana after smoke was detected in the cabin, officials said Friday, in the latest incident to hit domestic and foreign airline operators.

The aircraft, owned by Arik Air, was travelling from Lagos to Accra on Tuesday when the fault was detected but no-one was hurt, a company statement said.

“Arik Air flight W3 304 from Lagos to Accra on March 6, 2018 declared an emergency in line with standard operating procedures, when (an) unknown source of smoke was detected in the cabin”, it said.

The incident occurred 80 miles (130 kilometres) from the Ghanaian capital but the plane “landed safely in Accra without further incident”, it said.

It was the latest in a string of incidents involving the aviation sector over the past month.

On February 7, an emergency exit door fell off a Dana Air jet as it landed in Abuja after flying in from Lagos.

Six days later, an Atlanta-bound Delta airlines jet was forced to return to Lagos after a fire was detected in one of its engines with passengers using emergency slides to evacuate the plane, officials said.

On February 17, an Air Peace plane had to delay landing in the southwestern city of Akure because cows had strayed onto the runway. Another Dana Air plane overshot the runway at Port Harcourt on February 20 due to heavy rain and flooding.

And on Wednesday, the Nigerian government ordered a complete audit of Dana Air’s operations to determine the technical fitness of its fleet.

The airline was grounded after a 2012 crash outside Lagos that killed all 153 on board and six on the ground. Mechanical failure and pilot error were blamed.

No decision yet on 2019, our concern is restructuring – Ohanaeze