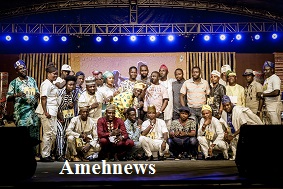 Twenty contestants have been shortlisted for the next stage of the ongoing Goldberg Ariya Repete traditional music concert, after the quarterfinal which held at Democracy Park, Akure, Ondo State on Friday, July 7, 2017.

The selected contestants who will perform at the semi-final scheduled for Friday, July 14, 2017 at the MKO Abiola International Stadium, Abeokuta, comprise 12 Fuji and 8 Juju artistes.

The lucky contestants expressed their excitement for qualifying to the next round of the concert and lauded Goldberg for the initiative aimed at promoting young and talented youths that will promote indigenous Yoruba music in the future.

It was a night of excitement in the Sunshine State as the night life in Akure and its environs was reawakened by the celebrities who came to perform in town.

The crowd could not have enough of Sir Shina Peters, the afro juju legend, 9ice and Abass Akande Obesere who all thrilled the spectators to magical excitement with their performances.

With Ariya Repete, Goldberg plans to bring to its consumers the best of Fuji and Juju music, two indigenous Yoruba music genres, and an unparalleled experience with the twenty contestants who will perform at the semi-final to compete in their respective capacities for a grand prize of One million Naira (N1, 000,000) and a recording deal each.

Ariya Repete which was initiated by Goldberg, from the stables of Nigerian Breweries Plc is aimed at promoting the culture of the people of South Western Nigeria, in line with the brand’s 3-point agenda of culture, respect and enjoyment.

The train moves to Abeokuta on Friday, July 14, 2017 for the Semifinal.