Former Petroleum Secretary, Chief Philip Asiodu, has said that Nigeria would overcome most of her socio-economic challenges if the public servants adhere to 50 per cent of the Four Way Test of the Rotary Club. 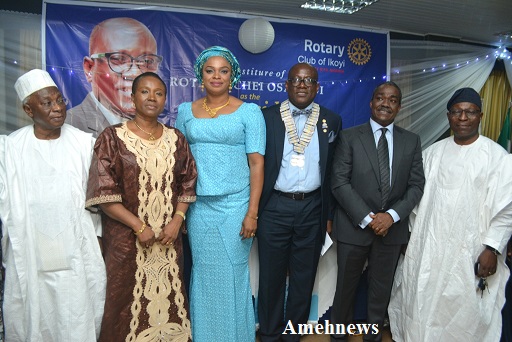 Asiodu, who spoke at the weekend in Lagos as a Special Guest of Honour at the investiture of Rotarian Isichei Osamgbi, as the 33rd President of the Rotary Club Ikoyi, noted that the Four Way Test of the Rotary International embraced by all its clubs is all encompassing in dealing with issues of principle and dedication to work and would be of great advantage in a developing nation, if applied in the delivery of service.

According to him the Rotary Four Way Test says; (1)  Is it the Truth, (2) Is it Fair to all concerned, (3) Will it build goodwill and better Friendship, and (4) Will it be beneficial to all concerned, surely, will address the issues of incompetence, lack of dedication and quality service delivery which adversely affect the public service, he said.

In his words:  the country would be better off by 50 years if her public servants would adhere to the principles of the 4-way test of the Rotary Club in their day-day activities in the country. With the abundance of human and natural resources, most of which are yet untapped, Nigeria should have done better than she is doing currently, he added. 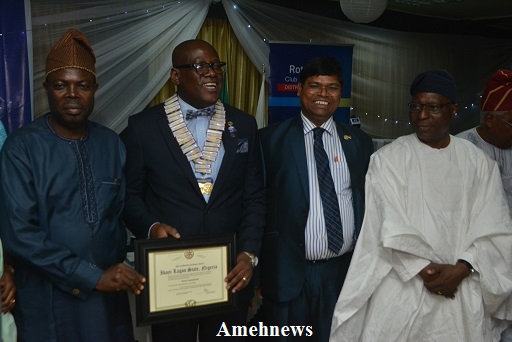 “Nigeria has a unique geographical location, scores of untapped natural resources and 3, 000 miles away from the Europe market compared to her Asian counterparts, who are 11, 000 miles from the European market and yet she has not been able to utilise the advantage of this geographical location to the advantage of her citizens”, he said regrettably.

Asiodu in his remark also urged qualitative education which would improve on the present poor quality in the nation’s educational system. He also advocated the teaching of what he termed a national language, which aside English language, will be spoken by children in schools across the country. Former Petroleum Secretary added that if each child learning at least one national language would promote unity, oneness and cohesion in a multi-ethnic nation like Nigeria, as soon everyone will be able to speak a language that another would understand aside English.

Collaborating Asiodu, Chairman of the occasion, Ogbueshi Alban Ofili-Okonkwo, Chairman of Autobahn Technique  Ltd, noted that applying the Rotary Four Way Test in picking leaders in the country the way Rotary does, will go a long in helping build a healthy nation of quality leaders, for which he noted that the new Rotary President, Isichei Osamgbi was.

Speaking in the same light, while admitting that the Rotary Four Way Test is a case study if adhered to in various spheres of life will help mankind, Former Minister of State for Foreign Affairs and later Education Professor Viola Onwuliri  who was the Guest Lecturer decried the high level of the vulnerability of the girl child in Nigeria, saying that proper education and training would go a long way in addressing this national problem.

Prof Onwuliri who spoke on her paper titled “Empowering the Girl-“Child for Sustainable Development”, called for collective collaboration between Rotary Club and other relevant bodies to give the child her rightful place in society, adding that providing quality education for girl-child was a gateway towards ensuring a more prosperous and sustainable future for Nigeria. She lamented that presently in the country, the girl child was seen as mere cannon fodder whose role in society was to produce babies and be used and abused at will.

She further added that no nation made any meaningful progress when it relegates it female folk to the background. She, therefore, called for immediate action to arrest the sad trend of out of school girl child which she disclosed that they numbers were staggering. 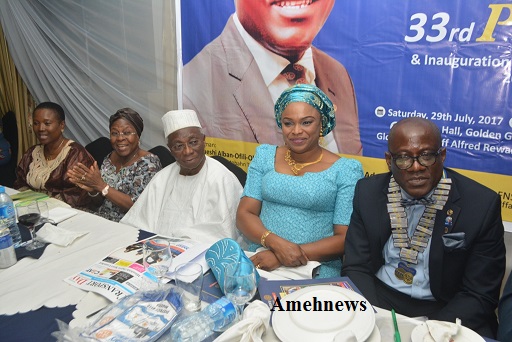 On his part, Professor Chris Ogbogbo, President Historical Society of Nigeria and Head of Department of History at the University of Ibadan noted that justice and fairness will help address several issues of inequality and agitations in the country, of which the Rotary Club’s principles have taken care of, whether it is the girl child education or other social economic matters.

Meanwhile, the newly inaugurated President, who took over from Rotarian Oladele Ojogbede had in his acceptance speech, said that the Rotary Club Ikoyi has been in the business of doing good in the last three decades, which he said has been necessitated by the fact that people need care and love.

He pledged that in the current Rotary year under his watch, such acts of doing good would be taken even to higher standards, insisting that the government cannot do everything. He said: “Our focus is to impact on more lives. Someone near you needs cataract surgery; we will undertake at least 100 of such surgeries in this Rotary year. We will build a blood bank and are partnering with the Police Hospital in Falomo, Lagos, where we carried out some renovations recently, among several other projects the Club plan to undertake in this Rotary year”.