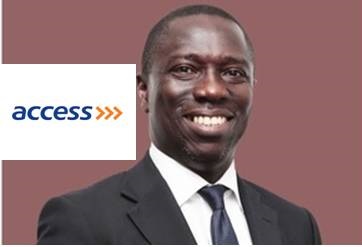 Roosevelt Ogbonna to takeover office of Obinna Nwosu who recently resigned his appointment to pursue other personal endeavours.

The new group deputy managing director began his banking career as an investment banker 20 years ago. Over the years, he worked across the Treasury, Risk Management, Commercial and Corporate Banking functions at leading financial institutions. He joined Access Bank in 2002, implementing strategies across different divisions that increased the bank’s market share and more than doubled the group’s balance sheet.

Ogbonna had served as Divisional Head, Commercial Banking and subsequently rose to the position of Executive Director, Commercial Banking, Access Bank, a position he held since October 2013. In that capacity, he oversaw firm-wide banking operations and formulated strategies to optimize the bank’s robust commercial business.

Ogbonna holds a BSc. in Banking & Finance (Second Class Upper Division) from the University of Nigeria, Nsukka, and is a Fellow of the Institute of Chartered Accountants of Nigeria. He is an alumnus of the Senior Executives Fellows program at Harvard University’s Kennedy School of Government and has attended various Executive Management Development programs at leading global institutions including the Institute of Management Development (IMD), the Wharton School of Business, and INSEAD.

He is a Non-Executive Director of Access Bank (Zambia) and the Access Bank (United Kingdom). He is also a member of several reputable professional organisations, including Institute of Chartered Financial Analysts, Chartered Institute of Bankers of Nigeria and the Future Leaders Group of the Institute of International Finance.

Ogbonna’s appointment has been approved by the Central Bank of Nigeria.