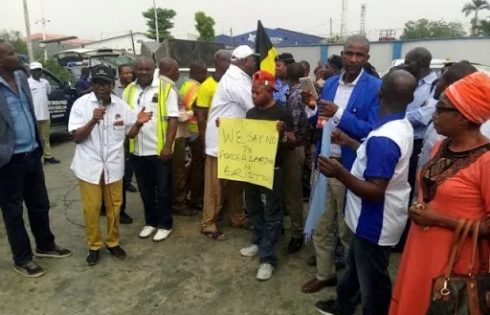 The National Association of Aircraft Pilots and Engineers (NAAPE) is set to protest the sacking of workers by Bristow Helicopters today, Monday.

The group made this known on Sunday, saying plans to carry out the picketing the organisation indefinitely was due to several labour issues, which allegedly were  contravened by the management.

The NAAPE had stated that another grouse is the issuing a N30 million employment bond for self-sponsored pilots by the management, which they say it’s unethical and sharp practice exhibited by the organisation.

The union frowned that all its seven-point demands from the firm to its members were blatantly ignored, despite efforts at addressing the issues.

According to a letter issued to all staff of the helicopter company by NAAPE in respect to the protest, dated July 29, 2020 with the reference number: NS/GS/NAAPE/vol.051/2020 and signed by the Deputy General Secretary, Mr. Umoh Ofonime, NUATE, to all members in Bristow, the union accused the management of the organisation of willful disregard to labour issues in Nigeria.

The NAAPE maintained that it had actively engaged with the management of the company for a period of time towards carrying out the renewal exercise of the conditions of service for national pilots and engineers.
The union also disclosed that it had previously mandated its members in the company to embark on a three-day warning strike to press home their demands, but the company was adamant to address the issues.

“At the moment, all sundry labour matters and negotiations between the two parties had broken down completely,” NAAPE said.

Again, the union accused the company of suspending the Condition of Service (CoS) and subverting the established terms of agreement with it.

It stressed that it also insisted on benchmarking salaries of national pilots and engineers to “an obsolete rate of N345/$1 coupled with their recent insistence on their proposal to implement N355/$1,” a rate the NAAPE hinted was not obtainable on any legal foreign exchange window, while still paying expatriate foreigners their full remuneration in U.S dollars.

Kindly Share This Story: Indications have shown that the Quorum Helicopter that crashed in Lagos…

Shell downsizing employees strength; attributes it to over staff