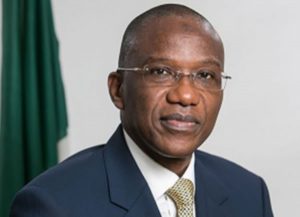 He also said that the corporation might assign more accounts to AMPs that had shown aggression and zeal based on the review of the AMP scheme so far.

He said this at the 2019 edition of the AMCON/AMPs interactive/feedback session in Abuja, according to a statement made available to our correspondent on Friday.

AMPs are consortiums with skills to ensure debt recovery and resolution appointed by AMCON after a rigorous selection process.

Kuru stated that collaboration with AMPs became necessary because AMCON had a total loan portfolio of over 12,000 loans of various sizes and sectors that were still lingering many years after the corporation was established.

He stated that when this was compared to AMCON’s staff strength, it became obvious that the corporation surely needed a strategic approach to improve coverage, recovery and results.

Kuru also disclosed that the AMPs were currently handling over 6,000 accounts within AMCON portfolio.

Although in terms of weight, the accounts, which had been outsourced to AMPs constituted only 20 per cent or N740bn of the total EBA portfolio of N3.7tn.

AMCON, he insisted placed equal importance on the recovery efforts as they counted towards the achievement of the corporation’s core mandate.

To achieve the mandate as part of the corporation’s renewed strategy to resolve these loans, he said, AMCON in 2016 introduced the AMP scheme to assist the corporation’s recovery activities, especially in tracing, identification and location of obligors with the intent to resolve their outstanding indebtedness; tracing, identification and location of assets of obligors (both pledged and unpledged) to enhance the EBA value, and achieve set recovery objectives.

The AMPs, he added, were also empowered to enable them get involved in negotiation of settlement and restructuring terms with identified obligors in line with approved guidelines; pursuing and enforcing debt recovery and collection activities geared towards optimisation of assigned portfolio to achieve set targets, and initiation of legal actions to further the loan recovery mandates in line with approved guidelines, among other obligor engagements.

With this laid down guideline and with AMCON sunset in sight, Kuru said AMCON was more aggressive with its recovery strategy and also expected its partners to equally step up their game because the corporation would no longer accommodate any AMP that was not moving on the same speed.

“We know it is not easy the jobs we have assigned to you. Recovery is a difficult job but even at that, a few of you (AMPs) have shown they cannot cope; we may have no choice to disengage such partner. But those that have done well, we will upgrade and even assign more responsibilities to such partners because there is indeed need for speed in this assignment.

“We are convinced that the AMP programme is key to the success of AMCON, and we will give you all the necessary support to make you succeed in this exercise,” the AMCON boss added.

The Principal Partner, Lexavir Partners, Mr Francis Agbu, and AMCON’s Group Head, Enforcements, Mr Aliyu Kalgo, who also spoke at the forum called on the AMPs to leverage on the special powers as provided by the AMCON Act 2010 as amended to improve on their assignment.