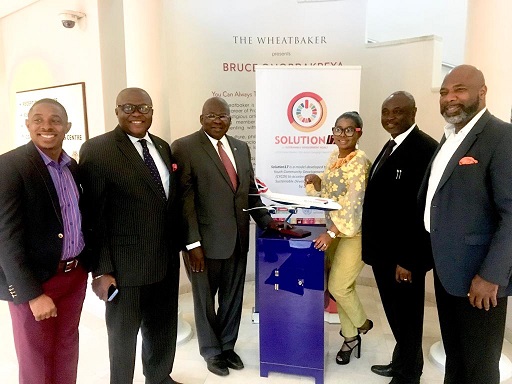 The initiative is privileged to be endorsed by project partners and champions which include reputable individuals and institutions like;  the office of the Vice President of the Federal Republic of Nigeria, United Nations office on Drug and Crime (UNODC), European Union and the reputable Nobel Laurette, Professor Wole Soyinka.

Creative Youth Community Development Initiative (CYCDI), developed an innovative and inclusive model, aimed at engaging youths to produce sustainable development goal solutions that can be implemented locally in Nigeria. This initiative which has been adopted by the United Nations is called Solution 17.

Speaking on the partnership, British Airways Regional Manager for West Africa, Kola Olayinka, commended the Solution 17 initiative. According to him, “as British Airways celebrates 100 years of delivering aviation service globally, we are proud to be impacting the Nigerian youth through this partnership as they represent the future of the country.”

Foluke Michael, Managing Director of Creative Youth Community Development Initiative said, “We are indeed delighted to be adopting British Airways as the official carrier for this project, they have been extremely supportive in ensuring a successful project.”

Full of energy and hope for the Nigerian youth, she went on to say “Solution 17 is not only valid for Nigeria, but is being adopted by other major world organisations to begin solving some of the problems particularly affecting youths, unemployment, substance abuse and so on.”

Solution 17 presents a sound opportunity for leaders to start refocusing on common problems facing the younger generation across different nations starting from Nigeria.

The Creative Youth Community Development Initiative’s flagship project, Innocreative Youth Club (IC2030) explores creative and innovative capacities of young people through the development of knowledge, skill and attitude that are relevant to employability and skills for entrepreneurship.

BOI records historical performance of N1trn in asset base, 18 years in operations