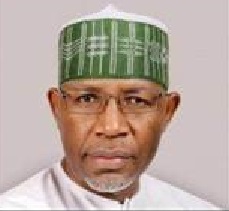 The appointment ends the uncertainties around the leadership of the Commission since the suspension of former Director General, Mounir Gwarzo by former Minister of Finance, Mrs Kemi Adeosun.

The appointment also ends the tenure of Acting DG, Mary Uduk and ends Mr. Mounir Gwarzo’s  continually on suspension as the Director General (DG) of the Nigerian Securities Commission (SEC) by the former Minister of Finance, Mrs. Kemi Adeosun since Dec 3, 2017.

In a letter read at the Senate on Tuesday, Buhari requested the Senate to consider and approve the nomination of Yuguda as SEC DG in line with the requirements of the Investment and Securities Act (ISA).

Also to be confirmed are three nominees as full-time Commissioners for the Commission, including Reginald C. Karawusa, Ibrahim D. Boyi and Mr. Obisan T. Joseph.

The President’s request was contained in a letter read by the Senate President, Senator Ahmad Lawan, during plenary in Abuja.

The letter read, “Pursuant to Section 3 and 5(1) of the Investment and Securities Act 2007, I write to request for confirmation by the Senate, the appointment of the following four nominees as Director-General and Commissioners of the Securities and Exchange Commission (SEC). Their CVs are attached herewith.”

Recall that the on December 3, 2017, the Federal Government of Nigeria appointed Dr. Abdul Zubair, as the acting Director General of the Securities and Exchange Commission (SEC) with immediate effect to replaced then DG SEC, Mounir Gwarzo who was suspended. Dr Zubair was before the appointment, the Director in charge of External Relations in the Commission.

The same former Honourable Minister of Finance Kemi Adeosun in a letter dated 13th April, 2018, said Uduk’s appointment had become necessary to ensure effective regulation of the Capital Market. Her appointment will, subject to satisfactory performance, subsist until further notice.

In her letter, former minister saying Uduk’s appointment is governed by the provisions of the Investments and Securities Act (ISA), 2007 and the conditions of service applicable to the Director-General of the Commission.

The Minister, further said Uduk’s appointment had become necessary to ensure effective regulation of the Capital Market. Her appointment will, subject to satisfactory performance, subsist until further notice.

The Minister also announced the redeployment of the former acting Director-General of the Commission, Dr. Abdul Zubair, to External Relations Department.

The outgoing Acting Director-General Ms. Mary Uduk, who has been in acting capacity since April 2018, has spent 34 years thereabout with the Commission. She joined the Commission in 1986 as an assistant financial analyst. Her career as a regulator has spanned many functions and departments in the Commission, from corporate finance, administration, to providing structural, policy and due diligence for capital market transactions.

She has also been responsible for managing several landmark capital market projects, including the registration of Capital Market Operators, articulating rules for bonds and equities; Mergers, acquisitions and Takeovers, and managing the banking and insurance industry consolidations between 2005-2007.

Uduk served as the pioneer Head of the Operations Division in the Lagos Zonal Office, and has headed the following Departments in the Commission: Internal Control, Investment Management, Financial Standards and Corporate Governance and Securities, and Investment Services Department, among others.

Zenith General Insurance’s Profit Before Tax Rises by 16% TO N3.67bn