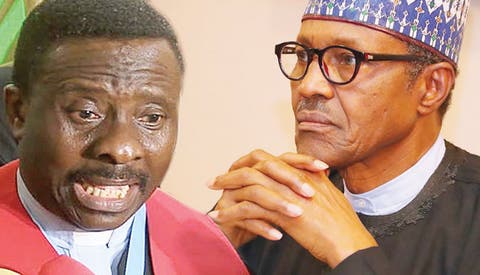 The President, Major General Muhammadu Buhari (retd.), has said that it is not true that Boko Haram insurgency has claimed the lives of more Christians than Muslims.

He argued that the contrary was the case, insisting that “90 per cent” of deaths from attacks by the terrorists were Muslims.

Buhari gave his position in an op-ed published in Speaking Out, a guest opinion column for Christianity Today, a United States-based magazine.

The op-ed was a tribute to the Michika Local Government Area Chairman of the Christian Association of Nigeria in Adamawa State, the late Pastor Lawan Andimi.

The cleric was executed by Boko Haram. The op-ed was titled, “Buhari: Pastor Andimi’s faith should inspire all Nigerians.”

Buhari in the op-ed said it was not true that Christians were the primary targets of Boko Haram insurgents.

The President of CAN, Reverend Supo Ayokunle, had in Ibadan on Sunday, urged Buhari to rise up to his responsibility of protecting lives and property in the country.

Citing the killing of Andim and a student of the University of Maiduguri, Ropvil Dalyep,  he said there was no doubt that the Boko Haram insurgents were targeting Christians.

Reacting to the notion that Boko Haram targeted only Christians, Buhari disagreed, urging Nigerians to see the insurgents as common enemies they must team up to fight collectively.

He also wrote that since he assumed office in 2015, his regime had not relented in fighting the insurgents, adding that to a large degree, the insurgents had been weakened by the Nigerian Armed Forces.

Buhari wrote, “Boko Haram are no longer one, unified threat, but fractured into several rivals. These splinters are themselves degraded: reduced to criminal acts which—nonetheless no less cruel—target smaller and smaller numbers of the innocent. We owe thanks to the Nigerian defence forces, bolstered by our partnership with the British, American military and other countries that we are winning this struggle in the field.”

Stop blaming other religion for Boko Haram attacks, Buhari tells CAN, others

He stated that the weakened Boko Haram groups had resorted to pitting Christians against Muslims.

The President urged both Christian and Muslim leaders to stop blaming other religions for attacks and killings by the insurgents.

He stated, “Sadly, there is a tiny, if vocal, minority of religious leaders—both Muslim and Christian—who appear more than prepared to take their bait and blame the opposite religious side. The terrorists today attempt to build invisible walls between us. They have failed in their territorial ambitions, so now instead they seek to divide our state of mind, by prying us from one from another – to set one religion seemingly implacably against the other.”

He admitted that the war against the insurgents had not been won completely, but stated  that Christianity was not under attacks in Nigeria.

Buhari stated, “Christianity in Nigeria is not – as some seem intent on believing – contracting under pressure, but expanding and growing in numbers approaching half of our population today. Nor is it the case that Boko Haram is primarily targeting Christians: not all of the Chibok schoolgirls were Christians; some were Muslims, and were so at the point at which they were taken by the terrorists.

“Indeed, it is the reality that some 90 per cent of all Boko Haram’s victims have been Muslims: they include a copycat abduction of over 100 Muslim schoolgirls, along with their single Christian classmate; shootings inside mosques; and the murder of two prominent imams. Perhaps it makes for a better story should these truths, and more, be ignored in the telling.

“It is a simple fact that these now-failing terrorists have targeted the vulnerable, the religious, the non-religious, the young, and the old without discrimination. And at this point, when they are fractured, we cannot allow them to divide good Christians and good Muslims from those things that bind us all in the sight of God: faith, family, forgiveness, fidelity, and friendship to each other.”

Paying tribute to the late CAN chairman in Adamawa State, the President recalled the clergy man’s sacrifices and good work as a Christian leader, noting that his lifestyle and faith in God should inspire all Nigerians.