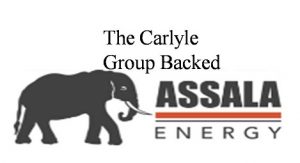 Carlyle-backed Assala Energy today announced the acquisition of Shell’s onshore assets in Gabon, Africa, for $587 million. Assala Energy will also assume associated liabilities, including a loan of $285 million. Assala Energy is a portfolio company owned by global alternative asset manager The Carlyle Group (CG: NASDAQ). With headquarters in London and a leadership team led by Chief Executive Officer David Roux, Assala Energy was created by Carlyle as a new oil and gas exploration and production (E&P) company to focus on energy opportunities in Sub-Saharan Africa. The company’s management team includes successful, Africa-experienced E&P professionals, many of whom have worked in Gabon previously. The transaction is expected to close in summer 2017.

According to press statement released on its website Friday March 24, 2017 disclosed that the Production from the assets in Gabon is approximately 60,000 bopd operated and 40,000 bopd net, the latter reflecting production volumes both from Shell’s own as well as third party-operated fields. Upon completion of the transaction, all Shell Gabon local employees will transfer to Assala Energy. The company’s initial focus will be to continue safe and responsible management of the assets acquired from Shell. Over time the company will also actively consider new growth and expansion opportunities and seek to play an important role in the future development of Gabon’s energy sector.

Capital for this investment will come from two Carlyle funds: (i) Carlyle International Energy Partners (CIEP), a $2.5 billion fund that invests in global oil and gas exploration and production, mid- and downstream, oil field services and refining and marketing in Europe, Africa, Latin America and Asia and; (ii) Carlyle Sub-Saharan Africa Fund (SSA) a $698 million fund that invests in buyout and growth opportunities across Africa.

Marcel van Poecke, Head of Carlyle International Energy Partners, said: “With a geographic focus in Sub-Saharan Africa, Assala Energy is committed to being a safe, responsible and efficient energy operator and to being an active contributor to the Gabon economy. Assala Energy will also explore opportunities to invest in future projects that create sustained long-term value for the local economy. Assala Energy plans to be a forward-looking partner, responsive to local market conditions. Our team of energy industry specialists at Carlyle has extensive experience in Gabon and we look forward to contributing to the sustainable economic future for the country’s energy industry.”

David Roux, CEO of Assala Energy, revealed that “Assala Energy will build on Shell’s 55-year legacy in Gabon by continuing to deliver responsible operations through best-in-class safety, environmental and social performance and transparent stakeholder partnerships. We are committed to ensuring long-term, sustainable growth and creating value. Assala Energy will invest responsibly to secure and increase production levels as well as oilfields’ life. We look forward to working with the Government of Gabon, the Gabon staff and our partners on this exciting opportunity.”

Eric Kump, Co-Head of Carlyle Sub-Sahara Africa Fund, added: “We are proud to be leading one of the largest foreign direct investments into Gabon and to sharing our experience of investing in Sub-Sahara Africa with David Roux and the Assala Energy team.”

In addition to the consideration, the transaction accommodates for a potential additional payment of a maximum of $150 million, subject to commodity price and production performance.