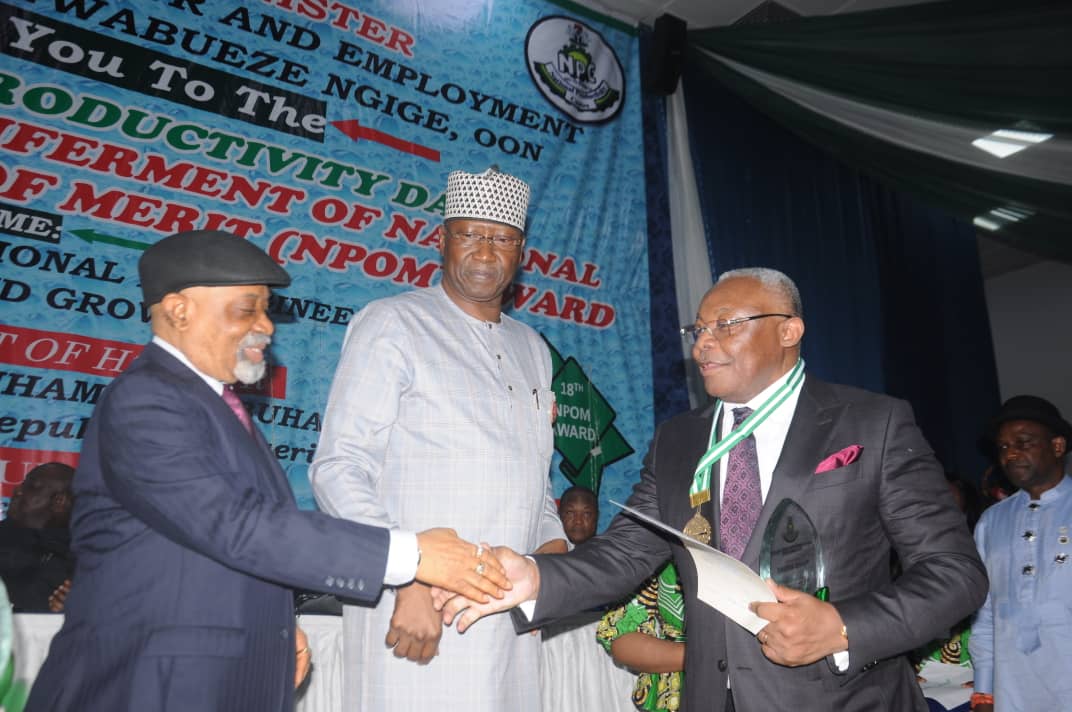 The event which is organised by the Federal Government through the Federal Ministry of Labour and Employment was held at the NAF conference centre, Kado, Abuja, yesterday. Organisers of the event noted that Casers Group was nominated and subsequently awarded the NPOM Award for its “high professionalism, continuous improvement practice and immense contribution s to wealth creation and overall development of Nigeria.”

At the corporate level, the National Productivity Merit Award acknowledges and awards organisations that are self-reliant in their adaptation and application of technology in order to guarantee for themselves cost effective operation and productive efficiency. Also, the award, according to organisers, “recognizes companies which show a trend for sustained increase over the years in such areas as capacity utilisation, sales turnover, profitability, employee welfare schemes and training facilities.”

Speaking to pressmen after the awards ceremony, the Chairman of Casers Group, Enyi Odigbo, who received the award from His Excellency, President Muhammadu Buhari, represented by the Secretary to the Government of the Federation, Boss Mustapha, said that the award speaks volume of the excellence from the Casers stable in helping people make choices by the way they promote brands they work for. Speaking on the implication of the win for the industry, he noted that based on the importance of the industry to the country, a lot more needs to be done. “Our industry has a lot of fundamental work to do but what this tells us is to appreciate the enormity of our responsibility as a profession. We are custodians of public opinion. We must be responsible enough to know that we can shape opinions, actually make people go ‘mad’.”

Also commenting, Vice Chairman of Casers Group, Ikechi Odigbo told pressmen that the award received is a significant milestone for the Casers Group and its subsidiaries-DDB Lagos, BBDO West Africa, Nexus and DDB offices across West and Central Africa. “For us as a Group, it is a statement, a fulfilment and reward for the vast milestones that we have achieved over time, it also represents a significant milestone for the entire Marketing Communications sector, because, I believe this is the first time that a marketing Communications Group is being recognised by the Federal Government for its exemplary service and contribution to economic growth and so we are elated on the conferment of the award.

“This award is for every staff within the Casers Group because this is the result of their hard work which has also being shaped by the vision of the Group Chairman whose philosophy is to build a culture where we are enemies of the ordinary. That commitment to be enemies of the ordinary in the way we do things, in the way we think, how we engage projects and business activities is what is creating the traction and the milestones of achievements we are seeing after 33 years of existence.

Casers Group is joined on the organisational award list by Dufil Prima Foods Plc. and five others, as well as Alhaji Aliko Dangote, Chairman of UBA and philanthropist, Mr Tony Elumelu, the Chairman of Channels Media, Mr John Momoh and 22 others in the individual category of the awards.

Since inception, 333 individuals and 84 organisations have been honoured with the National Productivity Order of Merit Award.