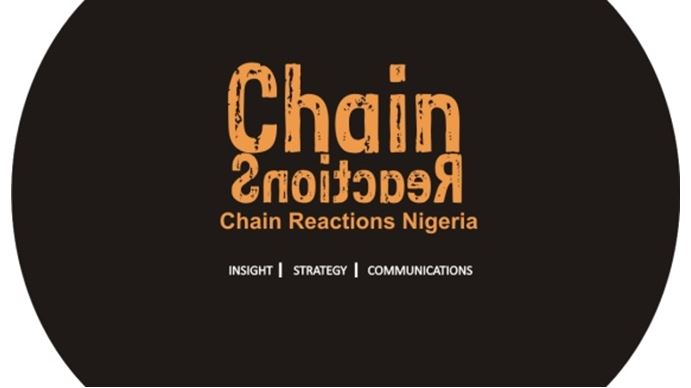 Chain Reactions Nigeria, one of the country’s vibrant Public Relations and Integrated Communications consulting firms, is set to host the launch of the 2017 Edelman Trust Barometer Survey Report for the first time ever in Nigeria with the public presentation of the global survey report on Tuesday 16, May 2017, at the Abora Hall, Eko Hotel & Suites, Victoria Island, Lagos.

Chain Reactions Nigeria is the exclusive affiliate of Edelman in Nigeria, the world’s largest global communications marketing firm with presence in 65 countries across the globe.

In a Press Release issued in Lagos and signed by Israel Jaiye Opayemi, Managing Director/Chief Strategist of Chain Reactions Nigeria, the consulting firm announced that the formal presentation of the survey report will be done by Jordan Ritternberry, Managing Director of Edelman, South Africa at a gathering that is expected to bring together leaders and influencers from government, business, media and non-governmental organizations.

Part of the highpoints of the event will be a speech by one of Nigeria’s most respected women in the Board room and Chairman of First Bank of Nigeria, Mrs. Ibukun Awosika. This will be followed by what promises to be perhaps the most no-holds-barred debates on trust by eminent representatives of the Nigerian government, the business community, the media and non-governmental organizations. Eminent speakers lined up to speak at the event include, Chairman and CEO of Channels Television, John Momoh; President of the Nigeria Guild of Editors, Funke Egbemode; Head, Marketing and Communications for Stanbic Bank, Nkiru Olumide-Ojo, and Founder, Consumer Advocacy Forum of Nigeria (CAFON), Sola Salako amongst other eminent speakers. They will discuss the subject of trust across the four pillars of government, business, media and non-governmental organizations.

The 2017 Edelman Trust Barometer is the 17th edition of the annual trust and credibility survey. The survey was done by Edelman Intelligence and consisted of 25-minutes online interviews conducted between October 13th to November 16th 2016. The 2017 Edelman Trust Barometer online survey sampled more than 33,000 respondents across 28 countries. The global survey asks respondents how much they trust the four institutions of government, business, media and nongovernmental organizations to do what is right.

“Though the survey has not been done in Nigeria and some other countries yet, the results are instructive for a country like Nigeria. We are in a global village and trends travel across borders and time zones. There is a sense in which the patterns of trust and distrust happening globally are beginning to ensconce in Nigeria without us knowing. As the exclusive affiliate of Edelman in Nigeria, we are delighted to share the historic privilege of hosting this event for the first time ever in Nigeria especially at this point in time in our nation’s history”, Opayemi enthused.

Speaking about the launch of the survey report in Nigeria, Opayemi further explained that hosting the event for the first time in Nigeria in the 17-year history of the report is an important step which underscores the strategic importance of the Nigerian market to Edelman.

“Edelman has been doing this for 17 years now but this is the first time this is being brought to Nigeria on the back of our recently consummated partnership. We intend to use this as a foundational step to help Nigeria establish the Nigerian Trust Index which is the average of a country’s trust in the institutions of government, business, media and non-governmental organizations. We want to begin to share ideas with these four critical institutions of society on how to know when the trust gap widens and what to do”, he added.

“Together with our partners in Edelman, we also intend to begin to lay the foundation for future work with key governmental institutions, corporate, media as well as nongovernmental clients who really care about growing their asset of trust,” Opayemi stated. The survey is significant because it documents insights and knowledge that help governments, businesses, media and nongovernmental organizations to proactively build and raise their trust equity as a major factor that impacts organizational reputation.

Giving insights into to what the 2017 survey report indicates, Opayemi hinted that the report shows that people’s trust in all the four institutions of government, business, media and nongovernmental institutions “to do what is right” experienced a decline, a phenomenon not recorded since Edelman began tracking trust.

Trust in government also dropped to the level that it is distrusted by 59 per cent of respondents in all the countries surveyed. For government, Opayemi said honest efforts must now be made by government to earn the trust of the people in not only what they say but what they do. “There is a deeply disturbing news in the Edelman Trust Barometer 2017, a yawning trust gap is emerging between elite and mass population. One clear indication from the report is that, there is a rise of populism in most countries of the world today and the mass population has taken control away from the elite. This has been made evident in both Brexit and the outcome of the last US Presidential election. It will be interesting to see how this will shape the next elections in Nigeria. The rise of populism has implications for government, business, media and nongovernmental organizations in Nigeria too.”

He however hinted that there is a sweet spot in the report for businesses which Chain Reactions and Edelman will be helping interested Nigerian businesses to build their asset of trust and reputation around. It is the cheering news that businesses are now more trusted than governments as about 37 per cent of the general population say CEOs are credible, while 29 per cent say the same about government officials in the countries surveyed.

The institution that experienced the deepest plunge in trust is the media. The media is distrusted by 57% of the respondents in all countries surveyed. “Debate at the event will necessarily revolve around how to grow trust for the media in the age of post-truth and alternative facts. Trust in the media is too vital an issue to be left unaddressed by any society that wishes to progress,” Opayemi added.

Trust in NGOs is also said to have dropped for the first time to nearly the same level as trust in business.  Trust in government also dropped to the level that it is distrusted in 75 per cent of all the countries surveyed.

Opayemi however expressed the hope that there are great lessons to be drawn from the survey report for all the four institutions in focus saying, “we are confident that the report will instruct governments, businesses, the media and non-governmental organizations operating within this eco system to take their assets of trust seriously.”