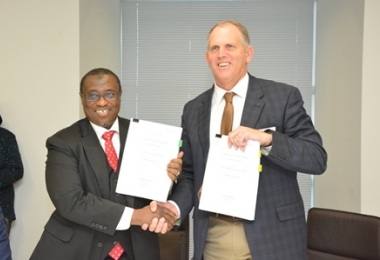 Nigeria National Petroleum Corporation (NNPC) and Chevron Nigeria Limited (CNL) have executed the second and final phase of an Alternative Financing Agreement that would increase crude oil production in the country by about 39,000 barrels per day.

The agreement, which was signed in London at the weekend, is also expected to achieve an incremental peak production of about 283mmscfd of gas.
Group Managing Director of the NNPC, Dr. Maikanti Baru, who signed on behalf of his Corporation, said the increment to be achieved by the agreement would spread “over the remaining life of the asset (until 2045).”
According to him, the project, which is about 92% completed, will cost about $1.7bn, with $780mn expected to be funded by third-party, while it will produce natural gas liquids and condensate extracted from the Sonam and Okan fields located in OML 90 and 91 in the Niger Delta.
Dr. Baru described the deal as a step in the right direction which would grow the nation’s daily production and support the Federal Government’s strategic domestic gas-to-power aspirations, while aligning with NNPC’s 12 Business Focus Areas (BUFAs).

He said the project would also include the completion of the Sonam non-associated gas (“NAG”) well platform and Sonam living quarters platform; drilling of seven wells in the Sonam field and the Okan 30E NAG well; as well as the completion of the 20” x 32Km Sonam pipeline and Okan pig receiver platform and development of the associated facilities.
“As we speak now, the facilities are 100% completed while wells are 40% executed,” Baru stated.
In carrying out the project, the NNPC/CNL JV adopted a 2-staged financing approach. While Stage 1 which provided $400mn sourced from Nigerian Commercial Banks (NCBs) achieved financial close on 1st August 2017, Stage 2, (signed Friday), is set to provide $380mn from International Commercial Banks (ICBs).
Out of the US$780mn total financing for both stages, Chevron’s Co-lending totals US$312mn while NNPC’s portion of the total facility stands at is US$468mn.
Speaking further on the Alternative Financing approach, Dr. Baru explained that it was aimed at plugging NNPC’s shortfall in funding JV cash call obligations including settlement of pre-2016 cash call arrears.
It will also enable full funding of NNPC’s JV obligations to restore investors’ confidence and stimulate further Foreign Direct Investments (FDIs) as we are beginning to witness, he noted.
Earlier in his remarks, the Managing Director of CNL, Mr. Jeff Ewing said his company supported the Federal Government’s aspirations to sustain oil and gas production.
“We know the important role gas supply to the domestic market plays in growing power generation. We also understand government’s need to seek alternative sources to fund profitable and bankable JV Projects,” Ewing added.
He commended Dr. Baru and other partners for backing the third party financing arrangement, which he said, would lessen cash call burden on the federation account.

He expressed Chevron’s commitment to execute the programme safely, timely and deliver its expected values for all stakeholders.
It would be recalled that in August this year, two sets of alternative financing agreements on JV projects were executed between the NNPC/CNL JV (project Falcon) and the NNPC/SPDC JV (Project Santolina).
Both are aimed at boosting reserves and production in line with parts of the federal government’s aspirations for the Oil and Gas Industry.

BEDC TO IMPROVE POWER SUPPLY IN IGARRA AND ITS ENVIRONS

Kindly Share This Story:In attempt to significantly improve power supply to Igarra town and other…