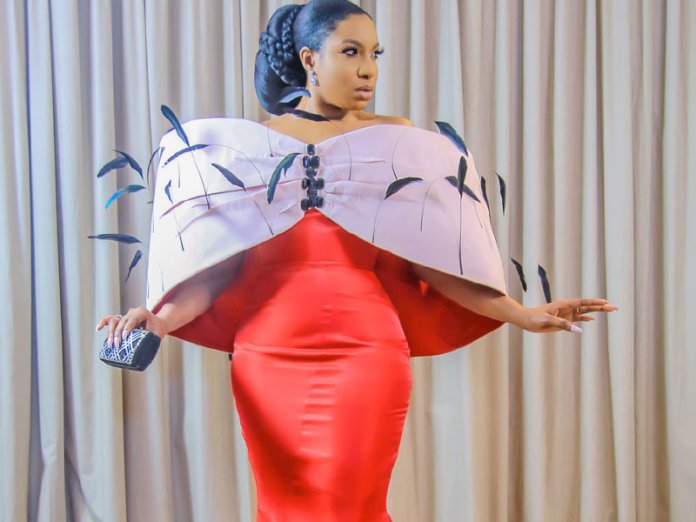 Chika Ike has an angelic figure that keeps head-turning. Tall, slim and fair skin. Ike as one of Nollywood divas has been a constant face in the Nigerian film industry. She first shot into the limelight in 2005 when she starred in her first movie, ‘Sweet Love’. But she has since moved on dabbling into this and that, breaking many boundaries. From Ronik International School where she had her primary education to St. Francis Catholic School in Egbe, Lagos and later the University of Lagos where she studied human kinetics and health education, it seems brighter future had awaited her.

From being an ordinary girl next door, she has gradually embraced celebrity status becoming an entrepreneur, fashion brand owner and real estate developer and lately an author of well-applauded book, Boss Up, which was written shortly after returning from Harvard Business School, thereby becoming one of a few actresses in Nigeria to attend prestigious American Ivy League university. Her reality TV show, African Diva, set up with the aims of empowering African women has continued to make an impact, enriching the lives of young women. Her Chika Ike Foundation established over a decade ago has continued to give a new lease of life to street children.

But there is always a propelling force driving her vision, determination. It is a personal conviction. She has become an inspiration to young girls who look up to her that if you can dream it, you can achieve it.

Her foray into the world of make-believe began in secondary school where she would stand in front of the class narrating the past soap operas and movies to her classmates. But her talents were kept under wrap from parents who saw the entertainment industry then for never to do well or dropouts. She has since made a success out of her endeavours and ready to conquer more terrains. Or better put, she has conquered the movie industry in Nigeria having starred in over 300 movies.

Last week Sunday, the  Ekwulobia Anambra State-born actor was in the news for good reason. This time, she has up her ante, with her movie, ‘Small Chops’ which paraded A list actors as cast. The private screening of the movie which took place at the Filmhouse Cinema in Lekki Phase 1 saw a huge number of celebrities and fans as they trooped out in large numbers to catch a glimpse of her latest venture.

Walking majestically into the waiting arms of the media on the red carpet, Chika Ike glowed. Decked in a red evening gown with a silver cape and a touch of feathers, she was a cynosure of all eyes.

The recently-released teaser shows the actress and producer playing the role of a sexy dancer. Small Chops, brought to the Nigerian audience by Flipscript Entertainment and Filmone Entertainment, hits the cinema on Friday, January 31.

Throwing more light on what the movie is all about, Chika Ike said, “Small Chops follows the story of Nikita, an afro dancer at a bar who catches the attention of Casper, an uptight business mogul. Casper pays for a weekend of private entertainment, and things don’t go as planned because of Nikita’s self-esteem and Casper’s totalitarian attitude. This causes sparks to fly. At the time they let their guards down, the sparks turn to fireworks.

Continuing, “Small chops mean side chicks, side boyfriends. It means everything. Small Chops is like an appetizer before the main meal. I used that term to describe side chick which is not the main meal. The main meal is a big deal. It was used several times in the movie. So the movie is about Nikita, a lead character which was played by me. A young lady who has been through a lot in life, dealing with so many issues. In this movie, so many things were addressed. We addressed sexual abuse, conscious bias, perception and prejudice in this modern society. It is a movie with a subject matter and a spice of entertainment. It is going to last in the cinema because you are going to crack your ribs and at the same time learn something in small chops.”

Speaking further, Ike said, “We have always faced conscious bias in the industry and all over the world as a woman and as a person. I want to talk about it. I have not faced any sexual abuse or harassment as an actress. I just want to talk about perception and what others have gone through. The conversation about it is already ongoing about women.”

Although the narratives are on-going, Ike believes voicing it out may not totally eradicate the notion but will reduce it and make more women empowered and respected.  “We felt it was a time to tell this story about perception in Nigeria. If you are a stripper or dancer everyone thinks you are a prostitute but this is not true. And everyone has a story. Nikita is an afro dancer and we are trying to break all stereotypes that the fact that someone has chosen a particular profession that she has a passion for such fellow shouldn’t be castigated.”

It is a star-studded movie no doubt and the choice of the actors of this award-winning movie is classic as it parades ‘A’ lists actors who have made a mark in the entertainment industry. She explained, “I picked them as experienced actors who have put in their best in the film industry in their actions and in terms of character delivery. I also consulted with my distributors and my team before finalized on the characters that would deliver the script the way we wanted it to be delivered. Again, we wanted different tribes and they all played different roles.  That is what inspired the actors in the movie.”

Directed by the United States-based Nigerian movie director, Robert Peters, who came directly to the film location in Lagos for four weeks non-stop production. The content, the production, and the sound remind you of ‘A’ list movies produced in Nollywood. Everything about the movie is breathtaking.

Explaining the effort that went into it, Ike said it is not just an ordinary movie, but it is a movie produced having an international audience in mind. “It took  the entire crew a whole full month to produce but the post-production took a whole year because we have to edit in Nigeria, then take it to America for colour correction and  sound.”

How has the screen diva been able to wear two caps as an executive producer and a lead character? Were there challenges?  “I have acted in several movies and this is my second cinema job, the first production was Miss Teacher. I have produced a TV job, a DVD job but this is the biggest. In terms of quality of production, in terms of input, in terms, principle photography, post-production, PR and everything and the funding is higher than any of my projects I have ever done in my entire career. It was edited in Atlanta, the US and most of the post-production was done in Atlanta.

“I am grateful to my co-producer,  Serah-Donald-Onyeachor for being there and support the production. I don’t know how I would have been able to do it, being a producer, actor, and the lead character and also being an executive producer and producer. So she came in and we have always worked together in the past and this is one biggest project. She came, supported me to give this project the best.”

And the challenges? “There were lots of challenges because this is a self-funded project in terms of production. We don’t have sponsors. It was challenging but it went well. The end is worth it because people love it already.”

As her fans and Nigerians set out to enjoy one of the best of Nollywood acts across the cinemas, Ike said, aside from being a producer, the takeaway about ‘Small Chops’ is love, family, relationship and above all, breaking prejudice. “For me, the take away is the traumatic effect of sexual abuse has on the victims. It goes deep. Also, it is to correct an age-long perception of women because you can’t see someone in a particular career path and quickly label the fellow a prostitute.”

She is also of high expectation and hopes that her fans will love the movie and embrace the message that they try to pass across.

Harmattan: Lack of Direct Flights To MMIA, Hundreds of Nigerians Stranded in Ghana