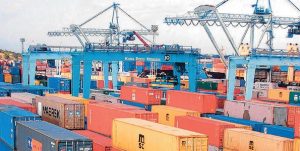 The agents alleged that activities of these corrupt government agencies are impeding trade facilitation at the port, causing cargo delay and adding to the cost of clearing.

Chairman of the Tin Can Chapter of Association of Nigeria Licensed Customs Agents (ANLCA); Prince Segun Oduntan, at a recent meeting with the Managing Director of the NPA; Hadiza Bala Usman alleged that NPA security operatives and the port Police have created a toll gate at the port where they collect between N500 and N1000 on every container entering and leaving the port.

Oduntan attributed the gridlock on the Tin Can access road and the inaccessibility of the port to the activities of the unscrupulous NPA personnel and Police officers. There is always a long queue on the access road whenever the trucks don’t pay, he said.

Making an appeal, he said, “I want the NPA to look at the issue of the 2nd gate at Tin Can Port, the road is inaccessible because of the NPA security, the police and others”

“They have a toll gate there and that is where they make money, on every trailer they collect between N500 and N1000, this is why they always struggle to go to that gate and this is why cargoes cannot come out of the terminals at Josepdam and TICT and even at the 1st gate” he said

Also speaking with on the alleged prevailing corruption at the Tin Can 2nd gate, Chairman of Tin Can Port Container Complex, Chief Chukwuemeka Shedrack alleged that customs officers are the major problem of the Tin Can port gate. Chief Shedrack explained that

“sighting” is not new at the port, he said that any container stopped for “sighting”, the owner would have to open the container again and un-stuff all the content for the customs OC gate to carry out another examination.

“After the customs have sighted, the officer that came for the sighting will collect money, if you don’t give him money he will write a bad report, if he asks you to pay N10,000 and you pay N5,000, he would go and tell his boss that there was no access to the container, the OC gate would now refer you back to enforcement or you pay N25, 000 as fine”.

Also confirming the trend is a clearing agent and a member of ANLCA, Olorogun Andrew Ugwi said that it is wrong for Customs officers to delay a container that has already been cleared by all agencies at the port through a joint cargo examination.

He alleged that this illegal act by the Customs also encourages the NPA security agents who are almost having no duty to perform at the ports again to interfere in clearing process.

“The NPA security would come and chain your trucks and your container, from here they will also begin their own extortion they would ask you to pay N10,000. The truck owner would also come in the process and ask you to pay for demurrage‎ because of time wasted”

“You can see that customs stopping containers at the gate leads to so many problems, it is unnecessary because complete examination have already been carried out at the terminal in which all the units were represented”

“And everything these guys do, ANLCA would succumb to it because they were receiving money, but we would fight them, it does not mean that because ANLCA is keeping quiet over it, then we are all fools, we are not fools”  Olorogun Ugwi said.

All efforts made to get access to the Customs OC gate for clarification on these allegations were frustrated by the NPA security men at the 2nd gate who denied access.

In a mail sent in respect of the issue by Public Relations Officer of the Tin Can Customs, Uche Ejesieme directed the aggrieved agents to come forward with evidence and documents to prove they were extorted at the gate by customs.

Ejesieme said that the command is proactive and it would not shield any corrupt officer, according to him, the Customs Area Controller, Bashir Yussuf would not hesitate to punish any officer investigated and found wanting or impeding trade facilitation.

“We will most humbly request that you oblige us with evidence of this allegation and once this is done, I can assure you that steps will be taken to probe into it in the interest of fairness”

“It is pertinent to emphasise that the system provides for checks and balance at every point. All these are geared towards ensuring that no loophole is created in the value chain”

“You may wish to know that there is a dispute resolution committee in the command, saddled with the responsibility of addressing such contentious issues. The importers or their agents can take advantage of that to put across their grievances” Ejesieme stated.