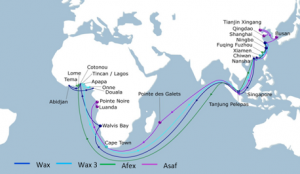 The firm said it has introduced the changes “in line with the West Africa market trend.”

CMA CGM intends to withdraw the WAX 2 service, which was operated with ten vessels with a capacity from 4,500-5,400 TEU.

The WAX service, operated with twelve 4,350 TEU vessels, will discontinue South Africa and Nigeria calls. Instead, the service will add Abidjan Westbound to its current export call with an improved transit time of up to 5 days. Abidjan from Shanghai will be reached in 37 days, according to the firm.

Furthermore, the WAX 3 service, a weekly service operated by CMA CGM’s partner with twelve 4,500 TEU containerships and dedicated to Nigeria, will have an added call in South Africa.

In addition, the AFEX service will drop Abidjan call and replace it by Cotonou. The service is operated by CMA CGM’s partner with twelve 4,350 TEU containerships.

The company added that port coverage of the ASAF service on the same route remains unchanged.

Trump agrees to meet NATO leaders in Europe in May