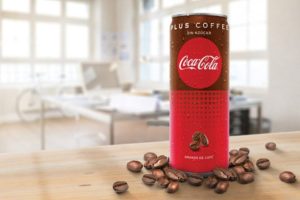 Coca-Cola has announced plans to make a push into coffee with the launch of Coca-Cola coffee later this year.

The company will unveil the new drink in more than 25 markets around the world later in 2019.

Commenting on its plans, Coca-Cola CEO, James Quincey, said: “Coke Coffee was designed to reach consumers during specific occasions and channels like the mid-afternoon energy slump at work.”

According to the company, the drink blends Coke with coffee, but has slightly less caffeine than a normal cup of coffee but more than a can of coke.

The company’s push into coffee comes as consumers have moved away from drinking sugary drinks but more of water, Coca-Cola zero sugar or plant-based drinks. Coca-Cola Coffee contains less sugar than a Coke of the same size.

Coca-Cola is also feeding into a trend that is popular, coffee. According to Mintel, a global market research company, ready-to-drink coffee is the fastest growing segment in the coffee category, growing 31% in 2016 and 2017. Chilled coffee drinks such as cold brew are also growing in popularity with consumers.

Coke coffee isn’t entirely new to the soft drinks giant. It has a strong market in Japan, where canned coffee has been popular in vending machines for decades. Coca-Cola’s Georgia Coffee brand has surpassed $1 billion in sales and expanded to other Asian countries.

Coke first made foray into coffee in 2006 with the launch of Coca-Cola Blak, but discontinued it after two years of disappointing sales. In 2017, it tried again with the introduction of Coca-Cola Plus Coffee in Australia. After revamping the taste to heighten the coffee aroma, the company brought it to Asia in 2018.

Coke also has plans to start selling ready-to-drink Costa coffee products in European markets starting in the second quarter of 2019. Coke bought the British coffee chain in 2018 for $5.1bn and finalized the deal in January.

COVID-19: Nigeria Economy and Manufacturing Sector, Journey So Far in 2020

Kindly Share This Story:It is a known fact that countries including Nigeria are experiencing the…