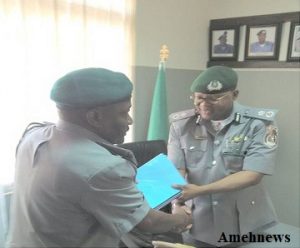 In a press statement signed and sent by  Cpro: Selchang Taupyen,K of the command stated how the new Customs Area Controller disclosed about his commitment to the enforcement of the core mandate of the service remains sacrosanct.

Compt. Mohammed Aliyu sought the support and cooperation of officers and men of the Command, stakeholders and other relevant security agencies at the border in order to effectively discharge his statutory responsibility of maximum revenue generation, suppression of smuggling and facilitation of legitimate trade.

The new Customs helmsman pledge to sustain, consolidate and improve on the achievements of his predecessor for effective service delivery.

Nigerians will always complain no matter what you do – Paul Okoye