The new Customs Area Controller of Seme Command, Comptroller Mohammed Aliyu who took over the leadership of the busiest international land border disclosed his administrative principles, as he settles down to consolidate and improve on the performance of his predecessor. 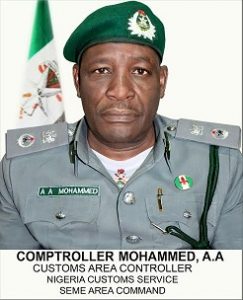 The Customs Area Controller bear out his mind on all issues of his assigned task to all the Sectional/Unit heads of the Command, the critical stakeholders and opinion leaders in the host communities.

The Compt. Said that compliance with the book of instructions that govern the service operations will be the hallmark of his tenure. He warned that any infraction observed in clearance procedure that is not in accordance with the extant laws will be visited with severe sanctions. He re-stated that only the approved checkpoints shall be maintained while patrol teams must be seen to be mobile and not static along the international route which is the corridor to other West African Countries.

The Command’s helmsman further disclosed that officers and men must not be seen to be indulging in clearance of goods, (as it strictly remains the statutory role of the registered agents only) who relate between the Nigeria Customs Service and the importers. He added that any officer caught in the act will not be spared, as he will be forced to face full disciplinary actions, which will serve as deterrent to others. He emphasized that the need for discipline in a regimental organization like the Nigeria Customs Service must be sustained, as without discipline, the enforcement of the core objectives will not be actualized, instead, the image of the service will be dragged in the mud.

He stressed that action detrimental to the core objectives of trade facilitation will not be tolerated, emphasizing that every officer must make conscious and deliberate effort to avoid being a barrier to legitimate trade facilitation across the frontier under his watch. He also directed that all actions must be strictly guided by the service operational golden rules (The 7 Cs).

The Controller further pointed out that all officers and men must be properly dressed at all times while on duty; adding that those with arms must not be engaged in any unprofessional act or conduct. He cautioned officers to explore all avenues of managing crises; if the need arise; officers must be guided by the provision of the law on arms usage.

Furthermore, while commenting on the anti smuggling unit, the Comptroller said he will strengthen the unit for aggressive anti-smuggling operation, he re- stated that the anti-smuggling war inherited from his predecessor must be sustained. He then urged the patrol leaders to redouble their efforts as he has no intention in entertaining failure under any disguise.

In the press stament sent by Chief Public Relation Officer, Taupyen, Selchang, Seme Area Command said the Comptroller declared that he will operate an open door policy which is aimed at actualizing the service core mandate of Maximum revenue generation, Suppression of Smuggling and facilitation of legitimate trade. He then warned that any other business will not be entertained during important working hours.

The Customs Area Controller concluded that his administration at the command level will bring in to the fore the use of mutual consultation and engagement between the stakeholders and the host communities for a healthy and symbiotic relationship. He added that cooperation and compliance with the statutory provisions of the service will surely enhance effective service delivery, but emphasized that smuggling will be fought to a standstill.

He maintained that the command will operate strictly in compliance with the policy thrust of the Comptroller General of Customs that ensures total enforcement of the federal government’s fiscal policies to its logical conclusion.