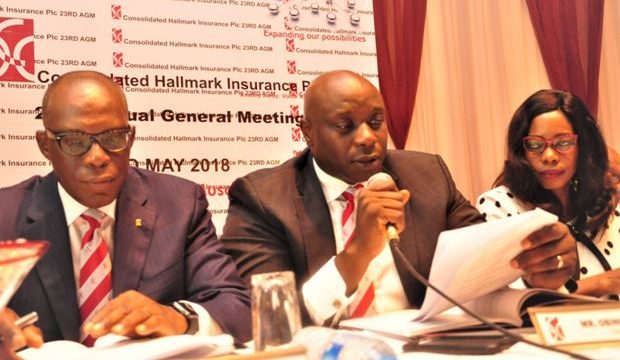 Consolidated Hallmark Insurance Plc has reported total assets of N9.49 billion for the year ended December 31, 2017. This compares with the figure of N7.44 billion in the same period of 2016. The company also paid out claims amounting to N3.3 billion to underline its commitments to policyholders.

Mr. Obinna Ekezie, the Chairman of Consolidated hallmark Insurance Plc said at its 23rd Annual General Meeting (AGM) held in Lagos that the company is paying out over N140 million as dividend to shareholders as proof of its financial strength and profitability in the insurance industry.

Mr. Eddie Efekoha, the managing director of the company said the insurer will continue the implementation of its corporate strategic plan which will enable “us to position ourselves as leaders in the insurance industry.”

Efekoha added that Consolidated hallmark Insurance “shall invest in new product development to adequately exploit the opportunities in the retail market segment.”

Buhari yet to get 2018 budget from National Assembly